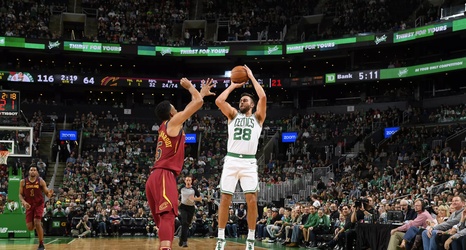 For the last two weeks, Celtics coach Brad Stevens has been able to get an up-close view of the C’s rookie class.

And over that time, Stevens certainty likes what he sees.

The contingent of rookies have started making a name for themselves this preseason with their impactful nature both on and off the court, which has brought high praise from Stevens, especially after the rookies carried play in the second half of Sunday’s 118-72 win over the Cleveland Cavaliers.

Max Straus, who reportedly signed a two-year contract Sunday, scored a team-high 14 points against the Cavs and knocked down 4-of-5 treys in 17 minutes while Carsen Edwards and Tremont Waters both scored 11 points as sparkplugs off the bench.