Celtics come back but can’t close the deal, lose to Spurs 96-88 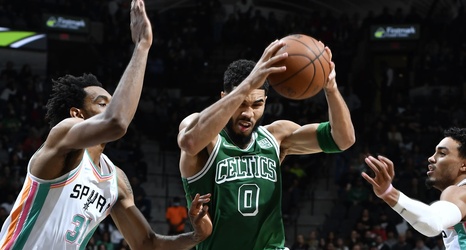 The San Antonio Spurs blew a 24-point lead, but closed the game with an unbelievable 15-0 run to beat the Boston Celtics, 96-88. Dejounte Murray made the key shots down the stretch and was the Spurs’ high scorer with 29 points.

The Celtics were led by Jayson Tatum’s 24 points (21 in the second half) and 16 from Jaylen Brown, who played through his ongoing hamstring issue.

The Cs again played without Josh Richardson and Rob Williams, still sidelined with non-Covid illness. Dennis Schröder got the start instead of Grant Williams, as the Celtics went smaller than usual.