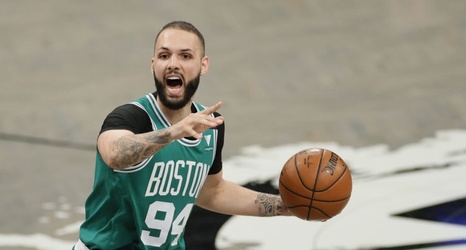 NEW YORK, NEW YORK - MAY 25: Evan Fournier #94 of the Boston Celtics calls a play during the first half of Game Two of their Eastern Conference first-round playoff series against the Brooklyn Nets at Barclays Center on May 25, 2021 in the Brooklyn borough of New York City. NOTE TO USER: User expressly acknowledges and agrees that, by downloading and or using this photograph, User is consenting to the terms and conditions of the Getty Images License Agreement. (Photo by Sarah Stier/Getty Images)

The Boston Celtics will have their work cut out for them this offseason trying to figure out ways in which they can re-insert themselves back into the conversation of upper-echelon of teams in the Eastern Conference.