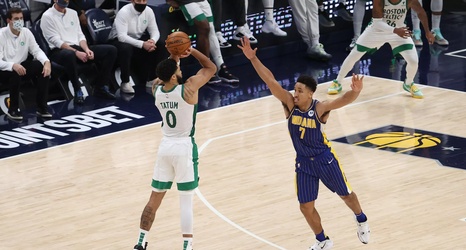 If you’ve become a fan of Brad Stevens’ after timeout wizardry, you know that so much happens before the inbounds pass. Al Horford’s game winner in Game 3 against the 76ers in 2018 is the perfect example.

For Stevens, it’s not just about getting the ball in your best shooter’s hands at the end of the game. He tries to leverage everything against an opponent’s defense: tendencies, switching schemes, footwork, misdirection, etc. On Sunday night against the Pacers, Stevens had another chance to draw up something special.

Coming out of the timeout, you can see Pacers head coach Nate Bjorkgren motion to Malcolm Brogdon to switch the coverage.