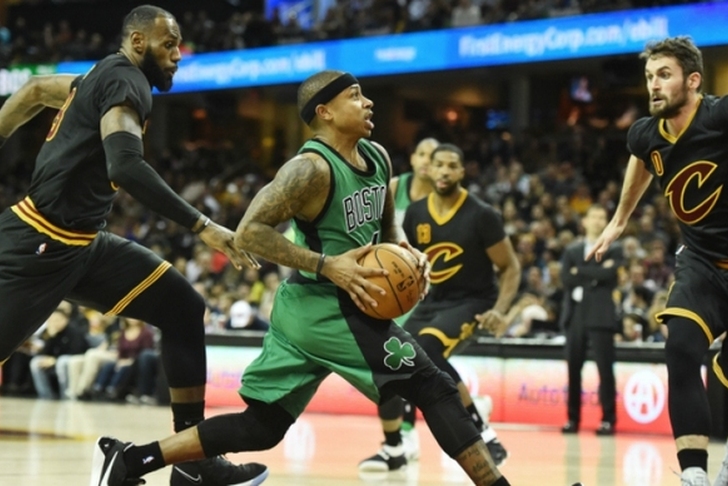 The Boston Celtics are again one of the top Eastern Conference teams, but can they repeat as the top regular season team and advance further in the postseason? Several key games throughout the regular season will determine that. With the league releasing the full schedule Monday night, the top games involving the Celtics are listed below.

We tried to avoid repeating the same teams over and over, so there's plenty of variation. Primetime and national TV games were weighted more heavily, although Boston has 25 this year, not including NBATV. Here are the top 10 games the Celtics will play in the 2017-18 regular season.

10. at Philadelphia 76ers - 7 p.m. ET, Oct. 20th, no TV
This is one of two games not on TV in this list. But it gets the nod over other games against teams like the Knicks or Raptors because it's the Celtics first look at Markelle Fultz. Boston traded out of the No. 1 overall pick, so perhaps Fultz will try to make Boston regret that pick.

9. at Oklahoma City Thunder - 9:30 p.m. ET, Nov. 3rd, ESPN
It's an early season matchup for the Celtics and Thunder, as Oklahoma City works in a new superstar in Paul George. This, at the very least, should be a fun game to watch.

8. at San Antonio Spurs - 9:30 p.m. ET, Dec. 8th, ESPN
The Spurs are one of the most consistent teams in the NBA history, constantly churning out 50+ wins under Gregg Popovich. That makes their top matchup with the Celtics must-watch national TV.

7. vs. Houston Rockets - 8 p.m. ET, Dec. 28th, TNT
Just a few days after Christmas, the Rockets take a visit to Boston. This should be a fun matchup, featuring the Rockets' newest toy in Chris Paul. They could also have Carmelo Anthony at this point, which could boost the rank on this list.

6. vs. Golden State Warriors - 8 p.m. ET, Nov, 16th, TNT
The game against the Warriors will rank high for pretty much every team in the NBA. No one in the NBA has a bigger target on their backs than Golden State. This is the first of two matchups. Golden State won't lose many games next year, so will a road trip to Boston be one of them?

5. vs. Cleveland Cavaliers - 3:30 p.m. ET, Feb. 11th, ABC
This is the last Celtics-Cavs matchup of the regular season, which means it will carry some added weight. It's a home game and the Celtics could very well be the favorites.

4. vs. Utah Jazz - 7:30 p.m. ET, Dec. 15th, no TV
Believe it or not, Gordon Hayward's first game against his old team is NOT on national TV. That's weird, although it being in Boston does dampen the hype around it. Still, it's a top five game for that storyline.

3. at Golden State Warriors - 8:30 p.m. ET, Jan. 27th, ABC
And here's the top Warriors matchup. It's a road game for Boston, making their hardest game even tougher. It's also the third of three straight TV games (excluding NBATV), when the Celtics visit both LA teams and take on Golden State.

2. vs. Cleveland Cavaliers - 8 p.m. ET, Oct. 17th, TNT
What a way to start the season. It's the very first game of the year for the entire NBA. This should be a preview of the Eastern Conference Finals and should be a good one. It's also Gordon Hayward's first game as a Celtic.

1. vs. Washington Wizards - 5:30 p.m. ET, Dec. 25th, ABC
The Christmas Day games are usually among the NBA's best and the Celtics' matchup happens to feature two of the best Eastern Conference teams. Both of these squads will be at the top of the East and this game could help swing the seeding.

Check out our Boston Celtics team page for all the latest Celtics rumors or download the Chat Sports App!