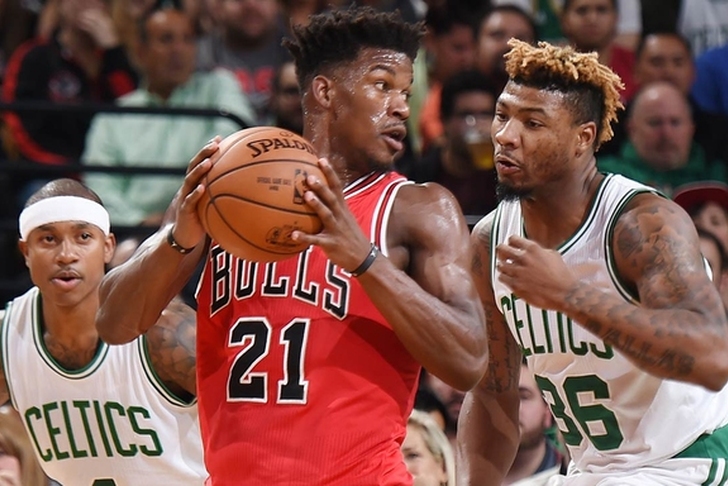 With the clock ticking down until the NBA Trade Deadline on Thursday at 3:00 pm ET, it's time to review the biggest rumors surrounding the Boston Celtics. Here's what you need to know, from Chat Sports:

Celtics pursuing Jimmy Butler again
The Celtics and Chicago Bulls were engaged in trade talks about a deal that would send All-Star Jimmy Butler to the Celtics this offseason, but the two sides weren't able to agree on terms. Now, the two are having trade discussions again about the same deal, according to Adrian Wojnarowski of The Vertical:

Boston at some point this week will reach back out, I’m fairly certain, and maybe come back with another offer. They’ve talked in the past. Chicago is in a position where they want someone to blow them away with an offer. Boston has the opportunity because of having the Brooklyn’s pick.

Celtics not giving up on possible Jahlil Okafor deal
Another deal that was dead but now isn't, ESPN's Marc Stein reports Boston may still be interested in acquiring Jahlil Okafor from the Philadelphia 76ers.

I have heard that Boston have not abandoned all interest in Jahlil Okafor. I certainly don’t think that the priority for them, the priority is getting Jimmy Butler or Paul George, but I still think you got to keep your eyes on the Celtics with Okafor.

The Bulls, Indiana Pacers and Portland Trail Blazers are also interested in Okafor, who is averaging 11.4 points and 4.8 rebounds in 23 minutes per game this season.

Boston pursuing P.J. Tucker
If the Celtics can't get Butler or another big name, they may look to upgrade their bench and are targeting P.J. Tucker, according to Adam Himmelsbach of the Boston Globe.

The Celtics have identified a small group of role players they could have interest in, and Suns forward P.J. Tucker is among them. But Boston will not go overboard or hinder its flexibility chasing these deals, and it has no plans to relinquish a first-round pick for a player like Tucker, who would simply offer assistance off the bench, a source said.

Tucker is averaging seven points and six rebounds per for for the Phoenix Suns this season.