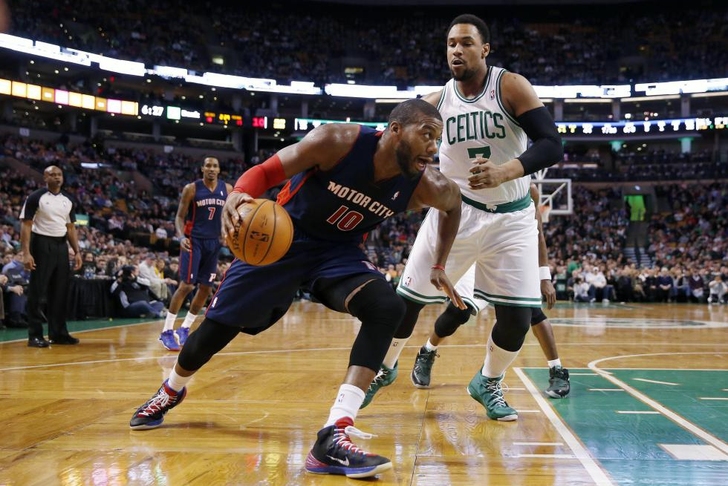 The Boston Celtics have gotten off to a predictably bad start to their season, and probably won't be in contention to make the playoffs again this season. However, this is the Eastern Conference and anything is possible.

The Celtics have already dealt point guard Rajon Rondo and have the impeding free agency of forward Jeff Green hanging over them, who is likely to be dealt before the trade deadline. If - or when - Boston does make another trade, who are they most likely to want in return? Things in Detroit have gotten better since they got rid of Josh Smith, but Monroe is a free agent after this season and hasn't been willing to commit to the Pistons long-term.

Detroit is looking for help at on the wing, making Green a viable option. However, the Pistons probably won't trade Monroe for someone unless they're going to get a long-term commitment from them, or if they're under contract for more than one year. Boston might have to add a draft pick or two in order to sweeten the deal, but Monroe would add an All-Star caliber big man to a roster that desperately needs one. Henson would add depth to Boston's short frontcourt rotation and give the Celtics something they're desperately lacking - a shot-blocker. Henson is 6’11″ and runs the floor extremely well, yet he’s been buried on Milwaukee’s bench as head coach Jason Kidd has favored smaller lineups.

The Bucks are rebuilding, and Henson doesn’t seem to be part of that rebuild, making him expendable. Milwaukee isn't a realistic long-term destination for Green, so Boston would likely have to make a deal involving some of their backup guards, which they have plenty of. Denver has made essentially everyone on their roster available for trade, and Mosgov is the most appealing piece for Boston. He would provide some size and a much-needed rim protector to Boston's big man rotation. If Denver is willing to make a deal for young players opposed to draft picks, this deal could get done.