What we learned: Bruins earn a well-rounded win over the Islanders 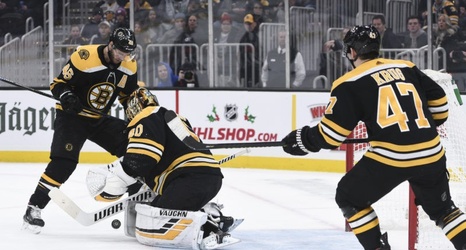 The Boston Bruins sat and waited as the New York Islanders retired Butch Goring’s No. 91 in a pregame ceremony at the renovated Nassau Coliseum (now known as NYCB Live). It didn’t take them long to find their groove, however.

David Pastrnak added his league-leading 47th goal of the season to get the Bruins up and running just 4:30 in. Bruce Cassidy’s squad built off of that tally behind one of their better defensive efforts of the season as goals from Matt Grzelcyk (at 13:10 of the opening stanza), Brad Marchand (at 11:06 of the third) and Charlie McAvoy (5:20 after Marchand’s tally) and Tuukka Rask’s 25-save outing capped off the well-rounded 4-0 victory in Long Island.