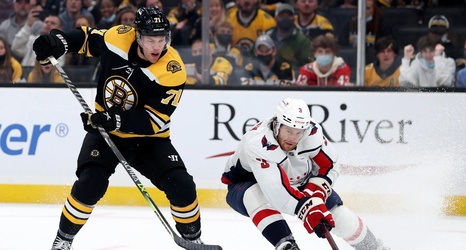 The Bruins capped off their preseason with a 4-3 overtime loss to the Washington Capitals tonight at the TD Garden.

The Bruins ended the six games with a 2-1-3 record.

Despite outshooting the Capitals 36-30, the Bruins allowed two goals within a minute in the second period that allowed Washington to gain their first lead of the game. The B’s trailed twice during he 60 minutes, before bouncing back late in the third to force overtime.

It was also Linus Ullmark’s second overtime loss with a score that ended in a 4-3 score. Ullmark made 26 saves on 30 shots in his second full game, allowing one power-play goal and three even-strength tallies.