Recap: Bruins battle back to edge out Canucks, 3-2 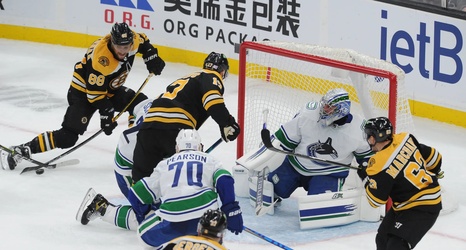 The Boston Bruins netted two power-play goals in the third period on the heels of a strong all-around performance from Brad Marchand to battle back to a 3-2 win over the Vancouver Canucks tonight at the TD Garden.

It wasn’t looking pretty through the first 40 minutes of the game, as the Bruins found themselves with more defensive-zone coverage and penalty kills than they would have liked.

The Canucks quickly took the lead in the first, just over three minutes in on a power play.