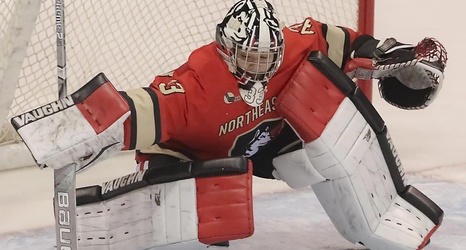 In a completely expected and not at all surprising announcement from the Women’s Hockey Commissioners Association (WHCA) awarded the inaugural National Goalie of the Year award unanimously to Northeastern’s Aerin Frankel. The other two finalists were Josie Bothun from Penn State, and Loryn Porter from Maine, who was the All-Hockey East second team goalie.

The announcement was very much just a formality after the season Frankel put together. Just going into the stats she set two single season records for goalies. Her .971 save percentage and 0.698 goals allowed average (GAA) bested the mark set by Ann-Renée Desbiens in her Patty Kaz winning season.