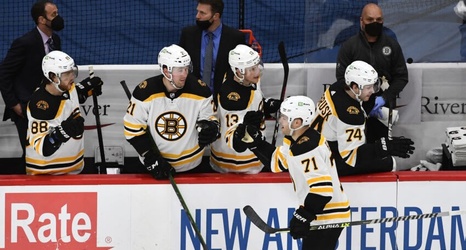 May 17, 2021; Washington, District of Columbia, USA; Boston Bruins left wing Taylor Hall (71) is congratulated by teammates after scoring a goal against the Washington Capitals during the third period in game two of the first round of the 2021 Stanley Cup Playoffs at Capital One Arena. Mandatory Credit: Brad Mills-USA TODAY Sports

A few days before the NHL roster freeze began, the Boston Bruins made their first big signing of the offseason, extending restricted free agent (RFA) defenseman Brandon Carlo to a six-year deal worth $24.6 million.

Well, it doesn’t look like Carlo will be the only key B’s skater to extend their stay in Boston as the Black and Gold and trade deadline acquisition Taylor Hall reportedly have a deal in place.