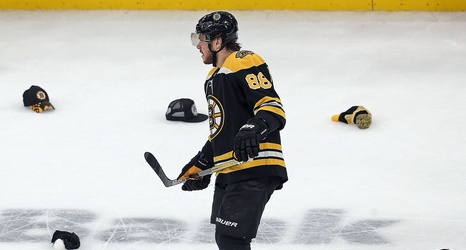 There’s something about playing the Montreal Canadiens that seems to bring out the best in David Pastrnak. Between his 4-goal night earlier in the year and this 3-goal showing, the Boston Bruins know they can always rely upon him against the Canadiens.

In netting a hat-trick on Wednesday night, he draws ahead in the league goal-scoring race with Auston Matthews and Alex Ovechkin; sitting on his own with 41 goals.

Not only that, he becomes the first Boston Bruins player to hit the forty-goal mark since Glen Murray hit 44 back in the 2002-03 season.