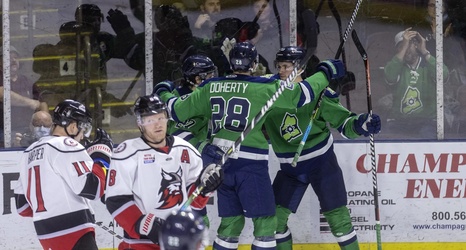 It’s playoff time all across hockey as all three teams in the Boston Bruins’ organization play on Monday night.

The Providence Bruins begin the AHL’s Calder Cup Playoffs in the Atlantic Division First Round, hosting the Bridgeport Islanders in a best-of-three series. Providence dropped its final six regular season contests, including three over the last week at the Syracuse Crunch (Tampa Bay Lightning), 2-1, and two at home against the Springfield Thunderbirds (St. Louis Blues), 3-0, and the Utica Comets (New Jersey Devils), 4-2.

Up in Maine, the Mariners entered the weekend down 2-0 in a best-of-seven series with the Reading Royals (Philadelphia Flyers) as the series shifted to Portland.