3 takeaways from the Bruins’ 5-2 loss to the Senators 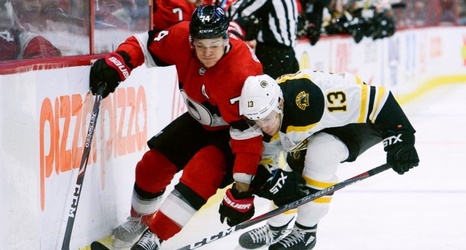 Two days removed their first home regulation loss of the season, the Boston Bruins traveled to Ottawa Monday night in hopes of ending their two-game losing streak. Instead, an uninspiring effort by Bruce Cassidy’s squad led to their third straight loss.

A lack of focus and attention to detail doomed the Bruins from the opening puck drop. Boston’s first blunder came just 1:35 in when a bad line change led directly to Artem Anisimov’s breakaway tally.

Anthony Duclair made it 2-0 with just under five minutes left in the opening frame when he took advantage of a fortuitous bounce and sent a wrister past Tuuka Rask, who finished with 23 saves.