3 takeaways from the Bruins’ 4-1 win over the Penguins 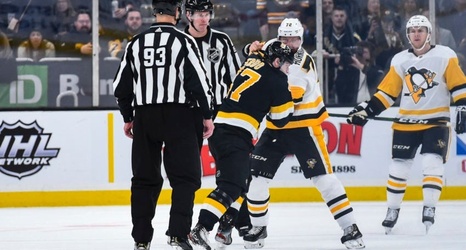 The Boston Bruins didn’t fight back after Emil Bemstrom punched Tuukka Rask in the head just 1:12 into Tuesday’s shutout loss in Columbus. Thursday was a different story against Sidney Crosby and the red-hot Pittsburgh Penguins.

The Bruins didn’t have an ideal start either, as Crosby, in his second game back from injury, fired a slap shot past Jaroslav Halak a mere 24 seconds in. But they persevered through the rough start as they baited Pittsburgh into taking penalties while generating some good looks on the power play.

With the tide slowing turning in their favor, Karson Kuhlman, fresh off his arrival from Providence, tallied a pair of assists on Sean Kuraly and Par Lindholm’s first-period tallies — just two minutes apart — to give Boston a 2-1 lead after 20 minutes of play.