3 takeaways from the Bruins’ 3-1 win over the Rangers 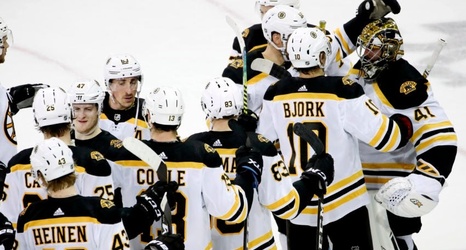 NEW YORK — The league-leading Boston Bruins kicked off their four-game road trip in the country’s largest market on Sunday. And they made the most out of their stop to the Big Apple before departing for Western Canada.

After defeating the lowly Red Wings for the first time this year, the Bruins picked up right where they left off against the Rangers in their second matinee of the weekend.

Things got a bit testy after Mika Zibenajad put the Rangers within one with 10:08 left in regulation. But the Bruins, sparked by a pair of goals from Charlie McAvoy and Charlie Coyle late in the first and second periods, held strong in the final 20 as Patrice Bergeron sealed the 3-1 win with an empty-netter with 12.