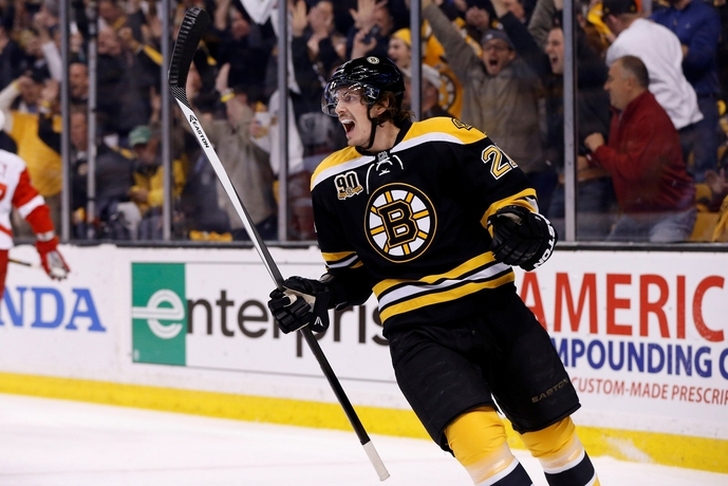 The NHL Trade Deadline is less than two weeks away, which means it's time to sit back and assess where each NHL team sits in the buyer/seller spectrum as the days tick down. With that in mind, let's take a look at the Boston Bruins and the rumor mill surrounding their current deadline wheelings and dealings.

Bruins Scouted Flames/Wild Game
The Boston Bruins are one of 11 teams who scouted yesterday's Calgary Flames/Minnesota Wild game, likely to get a look at three Calgary players who appear to be available before the deadline: Jiri Hudler, Kris Russell and David Jones.

“Lots of talk and lies and all of that sort of stuff,” Flames GM Brad Treliving said on Wednesday, via Aaron Vickers of NHL.com. “It’s still a ways away from the deadline, so people are still getting an idea. You’re seeing such tight bunching in the standings, so people are deciding which way they’re going to go here. But we’re in communication with everybody and we have a good sense a couple weeks out of where and what teams may be looking for.”

The Bruins were one of three teams (the Stars and Blackhawks being the others) with multiple scouts on hand at the Saddledome last night. All three teams had two scouts in attendance.

Hudler has been connected to the Bruins in various tidbits of speculation for some time now, but all of that is in the realm of rumor until proven otherwise. More Bruins news inside the Chat Sports iPhone and Android apps!

What's Up With Loui Eriksson?

Bruins winger Loui Eriksson has scored in all four games of the team's current road trip, and five of six overall. His recent hot streak has once again put his impending free agency under the microscope.

Are the Bruins willing to go to five or six years to extend Eriksson's contract before the deadline, taking his current upswing in value into account? Or, will the Bruins use Eriksson's name as a trade lynchpin to address other areas of need on the roster?

Per Zack Cox of NESN:

"The Bruins know what they have in Eriksson: an excellent two-way forward who, barring injury, is almost guaranteed to give them at least 20 goals each season. That won’t change regardless of how he plays over the next two weeks.

"For Boston, the decision of whether to re-sign him to an extension before the deadline — because taking the chance of him walking for nothing this summer is by far its least desirable option — primarily will come down to contract demands. Simply put: Are the Bruins willing to meet Eriksson’s asking price?

"But an uptick in productivity like the one Eriksson currently is enjoying heading into prime wheeling and dealing season certainly could make other teams willing to offer more attractive packages if the Bruins do, in fact, decide to trade him."

According to Elliotte Friedman of Sportsnet, it doesn't appear like the Bruins have fully engaged Eriksson in contract extension negotiations -- at least not as of yet.