"Hawks in Three." My Interview With @DrunkKane 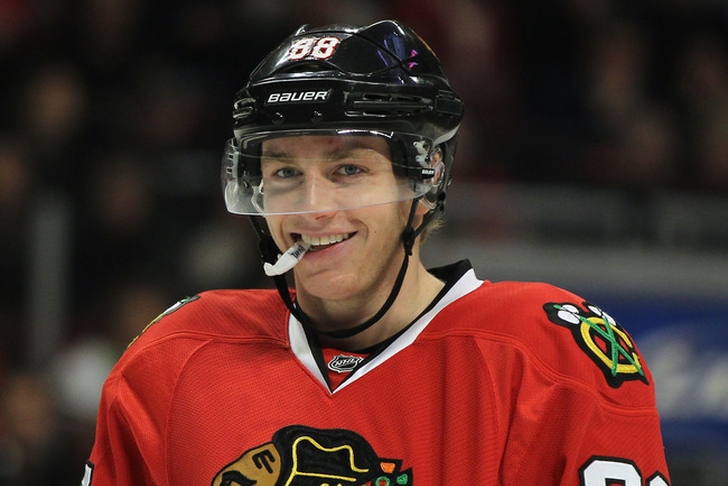 After Game 1 of the Stanley Cup Finals, I caught up with perma-drunk Blackhawks star Patrick Kane (@DrunkKane, it's obviously a parody people). We talked about, well, pretty much everything besides Game 1. Here ya go:

Is this really a fu*kin question? My all time favorite team is myself. I run the show. I'm the fu*kin face of this league.

What’s the worst city you’ve ever played in?

That sh*thole Detroit. Is there a place you can go and not get fu*kin shot?

What's your predication for your Stanley Cup Finals performance?

Fu*k, you might as well pencil me in already for first star for every fu*kin game. My hands are fu*kin filthy the Bruins can't stop this sh*t.

How can the Bruins be beaten? What about the Blackhawks?

Just gotta keep my head up this fu*kin series, don't want to be close-lined by Brad Marchand's nose. Hawks in 3. Don't ask me how, I'm Patrick Fuckin Kane

Who’s the biggest girl in the NHL who is always taking a dive?

Fuck divers. I take more hits than anyone in this fu*kin league. *rips bong*

What are your thoughts on going for Wilt’s record?

Fu*k, the club just shut down because I walked in and all these (ladies, Patrick) turned into sprinkler systems and flooded the place. Did Wilt ever do that? Fu*k him. Kiss my ass.

Who wins in a game of drink, you or Dean Martin? You vs. Hemingway?

Hungout with 'em both yesterday 'n they pissed themselves before 10. Sh*t happens when you booze with Patrick Fuckin Kane. I'm a goddamn Stanley Cup champion. No one drinks more than me.

What’s the trick to avoiding or curing a hangover? That is if Patrick Kane even has experienced a hangover.

Can't get hangover if you're always fuckin hammered.