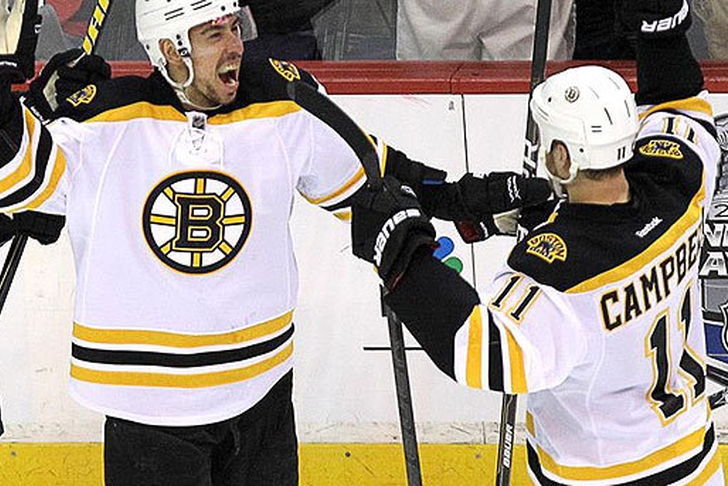 What a shocking move.

Last week, reports surfaced that the Bruins were not anywhere close to a new contract with center Greg Campbell, and that talks were progressing slowly with center Chris Kelly. Not long after these reports surfaced, though, did new ones come out stating that talks had progressed hugely and that the Bruins were very close to inking both center to multi year contract extensions.

Now, the Bruins have officially signed both of them. Well, sort of.

Greg Campbell, the tough, rugged center who came over in the trade that also saw winger Nathan Horton make his way to Beantown, was a mere afterthought when the trade with Florida was first announced. Many people, including myself, viewed Campbell as a mere piece off the giant scrap heap that was the Florida Panthers. He proved everyone wrong, proving to be an integral part of the Stanley Cup winning Bruins squad in 2011 by providing energy, solid defensive play, penalty killing, and intimidation with his ability to go out and throw his body around for short spurts at a time. His solid play continued in the 2012 season, and was once again a major part of the Bruins team.

After the extension of fourth line winger Daniel Paille, many believed that the Bruins were forced to make a choice. Chris Kelly or Greg Campbell. It was widely speculated that the Bruins would resign Kelly and be forced to let Campbell hit the open market. But, the Bruins announced just a few days ago that they had signed Greg Campbell to a three year, $4.8M contract extension. Campbell cited the team's style of play, the city of Boston, and the potential to win more Stanley Cups in the future as his reasons for staying in Black and Gold knowing full well he could get a hefty raise on the open market with the lack of experienced centers hitting free agency.

Chris Kelly was also signed to a new contract, but the team hit a snag in the process when the NHL rejected the deal because it would have sent the Bruins over the cap limit, as they still have the contracts of UFA's Brian Rolston, Mike Mottau, and Greg Zanon on the books, as well as the contract of RFA Benoit Pouliot. However, Kelly and the Bruins decided to make what I like to call an "official, but unofficial" announcement. They announced that they had agreed to a deal in principle with the third line center that would pay him a total of $12M over the course of four years. The contract will officially be signed on July 1st, when the contracts of Rolston, Mottau, and Zanon are all off the books and teams are allowed to spend over the cap by a certain amount temporarily.

Kelly cited the exact same reasons as Campbell did for staying in Boston, stating on the official conference call that he and his wife have fallen in love with the city and he did not want to sign anywhere else.

This is good news for the Bruins, as both players are big pieces to the forward corps. When all is said and done, it appears that the lineup will look very similar to the one that was rolled out last October. Barring some sort of massive unexpected trade that would send a forward such as Milan Lucic or David Krejci, both of whom struggled mightily last season and even more so in the playoffs. But let's be real here. The chances of the Bruins trading away one of them are the exact same of me playing professional hockey. and if you've seen me play, you know that that will never happen, as great as it may sound.