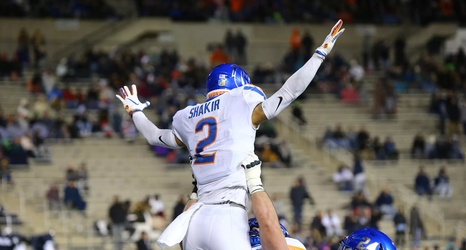 The Broncos opening drive mastery continued as they took the opening series down the field for a quick score behind some snazzy running from George Holani and John Hightower. 7-0 Broncos before our couch seats were even warm. A dud of an opening series by the Aggies and a (somewhat predictable) weak second series for the Broncos kept things the same as USU got their second shot at paydirt. Paydirt is what they got after a 47-yard grab and a 3rd down one-hander of a TD by Caleb Repp. This is a ballgame, folks.

Broncos failed to do much with their next possession, which apparently didn’t sit well with Jalen Walker as he pick-sixed Jordan Love on the first play of the next Aggie series.