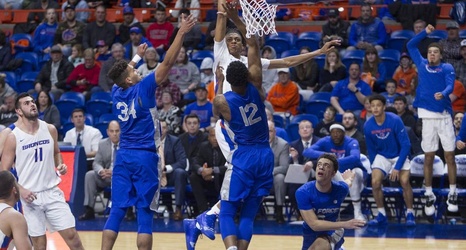 As Derrick Alston’s feet left the hardwood, the season-long struggles of the Boise State men’s basketball team seemed to float away with him.

The 6-foot-8 redshirt sophomore’s putback dunk was as disgustingly good as the crowd of 5,677 had seen all season at Taco Bell Arena.

Now the Broncos just need to bottle that moment and take it with them to next week’s Mountain West Tournament in Las Vegas.

“I’ve been trying to get a putback dunk for a while, so that was kind of my free one. It came off right and I just made a play,” Alston said.