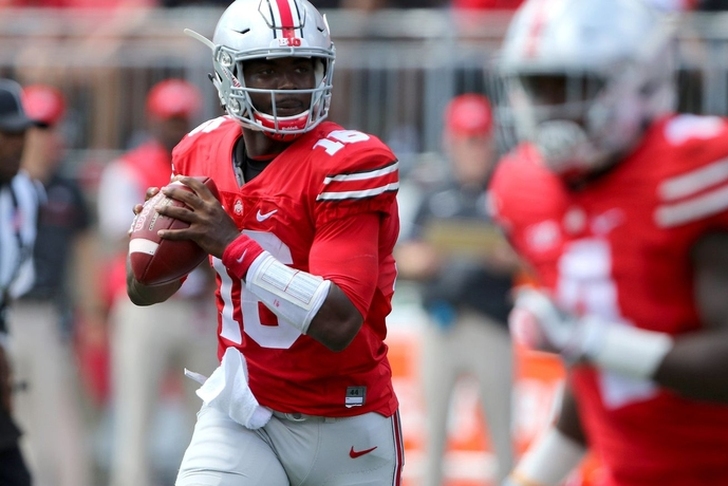 The Big Ten had a pretty successful opening weekend, as Wisconsin upset then-No. 5 LSU, while the rest of the conference's big dogs won in impressive fashion. Here's our Big Ten Power Rankings heading into Week 2:

14) Purdue Boilermakers
Purdue beat Eastern Kentucky, but that's nothing to write home about. This team still has the lowest talent level in the conference.

13) Rutgers Scarlet Knights
The Scarlet Knights get credit for going on the road and playing a tough Washington team. The problem is they were absolutely steamrolled and put up virtually no resistance, losing 48-13.

12) Illinois Fighting Illini
New head coach Lovie Smith will make Illinois relevant sooner rather than later. A 52-3 win over Murray State is nice, but that is not a win that's necessarily indicative of success against FBS teams.

8) Northwestern Wildcats
The Wildcats were upset by a good Western Michigan team, losing 22-21, but this was supposed to be the best Northwestern team they've had under head coach Pat Fitzgerald. That is clearly not the case, and expectations need to be lowered for them this year.

7) Minnesota Golden Gophers
Minnesota held on to beat a decent Oregon State team at home last Thursday, using a big game from their defense, as well as running back Rodney Smith. However, the passing game hasn't improved at all - which is a big problem.

6) Michigan State Spartans
The Spartans needed a touchdown in the last five minutes to preserve a victory against FCS-level Furman. Head coach Mark Dantonio will have these guys playing at a high level sooner rather than later, but it's clear Michigan State is missing the several players (like Connor Cook and Shilique Calhoun) that left for the NFL.

5) Nebraska Cornhuskers
Nebraska got off to a slow start, but ended up cruising to a 43-10 blowout win over Fresno State. They look very much improved on both sides of the ball, and their running game could be one of the better units in the country as they pick up up nearly 300 yards on the ground.

4) Wisconsin Badgers
Beating LSU was HUGE for Wisconsin, and their defense looks like it will be a top five unit again in 2016. Corey Clement is healthy and as dominant as every running the ball, but I still have major questions about their passing game.

3) Iowa Hawkeyes
Iowa got off to a 21-0 lead in the first nine minutes of their game against Miami (OH), and then put it on cruise control the rest of the way. This is a veteran team coming off a 12-2 season - we know how good they are.

2) Michigan Wolverines
The Wolverines simply took care of business against Hawaii, winning 63-3. New quarterback Wilton Speight didn't necessarily do anything to aspire confidence, but Michigan doesn't need him to be a world beater - the rest of their roster is that good, and they proved it.

1) Ohio State Buckeyes
J.T. Barrett threw a pick-six on his first drive of the season. After that, Ohio State outscored Bowling Green 77-3 and Barrett set a school record for total touchdowns (seven - six passing, one rushing). Yeah, they're good.