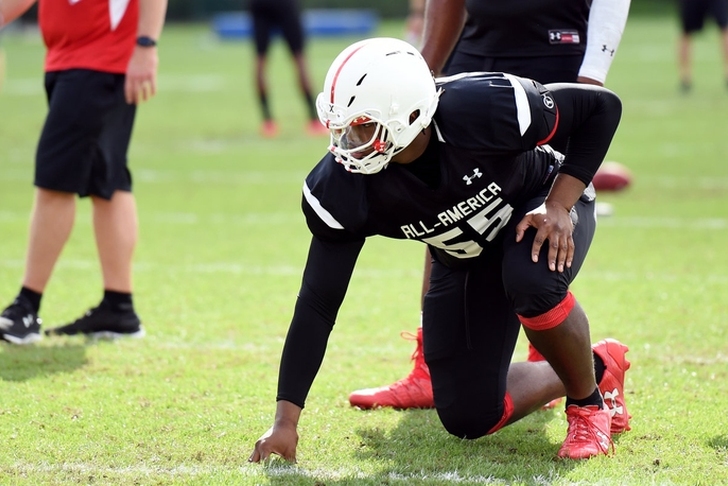 The Big Ten once again had a strong collective effort on National Signing Day, with two schools in the National Top 5 and five in the Top 25. While Ohio State and Michigan dominated the rest of the conference, a few teams nabbed talented prospects that could have NFL futures.

A big tip of the hat to 247Sports, as the top recruits are based on their rankings. It's worth mentioning that all of the top 14 recruits are in the top 85 overall. With that in mind, let's detail the 14 best 2016 recruits who signed with a Big Ten school.

14. S Lamar Jackson, Nebraska Cornhuskers
Jackson is the only Nebraska commit on this list. The four-star safety pledged the day before National Signing Day. He's the No. 81 overall player in the class and the No. 5 safety. Hailing from California, landing Jackson was a huge get for the Huskers.

13. WR Austin Mack, Ohio State Buckeyes
Mack enrolled early at Ohio State and could make an early impact. He's a four-star recruit who hails from Fort Wayne, Indiana. Mack is the No. 76 overall player. He's one of four Buckeyes to make the top 14. For more on Ohio State's recruiting class, check out the Chat Sports Android and iPhone app.

12. TE Devin Asiasi, Michigan Wolverines
Asiasi is the No. 3 TE in the nation, with Michigan making a late push to land Asiasi. The Wolverines beat out USC and UCLA for land Asiasi, the No. 74 overall player and No. 12 from California. He's one of five Wolverines on this list.

11. OG Terrance Davis, Maryland Terrapins
Maryland lost several key players to Ohio State before Signing Day, but managed to keep Davis. He's Maryland's only recruit here, but is the No. 3 guard. He's the second-best player from Maryland and the No. 73 overall player.

10. CB David Long, Michigan Wolverines
Long was originally committed to Stanford, but decommitted and eventually pledged to Michigan. He's from California and the No. 9 player from the state. He's the eight-best CB and the No. 65 overall player. For more on Michigan's recruiting class, check out the Chat Sports Android and iPhone app.

9. QB Brandon Peters, Michigan Wolverines
Peters has already enrolled and at least has a shot at playing early. Peters is one of the top pro-style commits in the 2016 class and the No. 61 overall player.

8. RB Demario McCall, Ohio State Buckeyes
McCall isn't the top RB on this list, but he might end up being more of an athlete ala Percy Harvin than a true RB. He's the No. 2 all-purpose back and the No. 3 player from Ohio. He's the 44th best player this year.

7. DE Shane Simmons, Penn State Nittany Lions
Simmons is the first of three players from Penn State on this list. He's the No. 41 overall player and the No. 4 weakside defensive end. He is the best player from Maryland, and could shift to OLB for PSU.

6. OT Ben Bredeson, Michigan Wolverines
Bredeson just made it inside the Top 40, checking in at No. 39. He's the No. 5 offensive tackle, which was a major need for the Wolverines. He was the top player from Wisconsin, as the Wolverines went into Badger territory to land him.

5. DE Jonathon Cooper, Ohio State Buckeyes
Another early in enrollee for OSU, Cooper could pair with another talented DE lower on this list. The Ohio-product is the No. 32 overall player and a four-star recruit.

4. OG Michal Menet, Penn State Nittany Lions
Penn State needed offensive line help, so it's a good thing they kept the No. 2 guard in-state. He's the No. 28 overall player and just missed out on being a five-star recruit. Download the Chat Sports Android and iPhone app for more on PSU's class.

3. RB Miles Sanders, Penn State Nittany Lions
Sanders is the first of three five-star recruits and the highest-rated Penn State commit. Sanders is the No. 20 overall player and the top-rated running back in the nation.

2. DE Nick Bosa, Ohio State Buckeyes
Bosa is the younger brother of now-former Ohio State star Joey Bosa. He's the No. 8 overall recruit and the top strong-side DE in the nation. Hailing from Florida, he's the No. 2 player from the state.

1. DT Rashan Gary, Michigan Wolverines
Gary was the No. 1 recruit in the nation and the Wolverines wanted him bad. Michigan got their man, marking the first time they've managed to land the top recruit. He's from New Jersey and is expected to make an early impact.