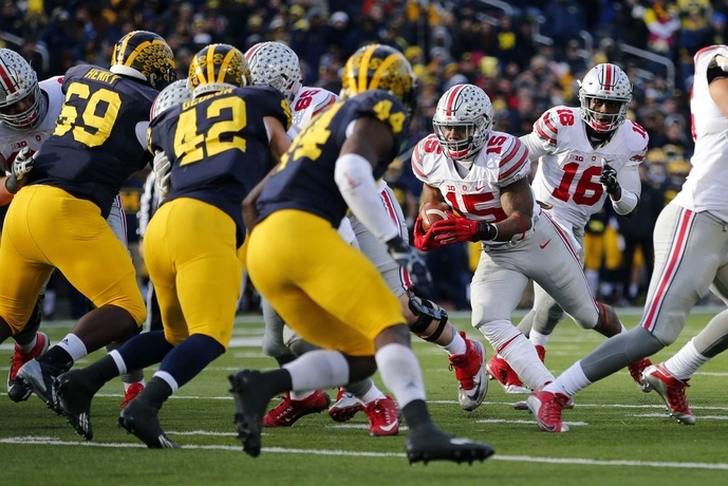 Recruiting is a never-ending activity in college football. That's absolutely the case for the Big Ten, as several programs are consistently fighting for some of the best recruits in the nation. With the start of the season still months away, we though it was a great time to take a look at the which Big Ten schools have the early leg up on the rest of the conference.

A big tip of the hat to 247Sports, as their rankings and commitment tracker were used. Nine different Big Ten teams are in the Top 25, although Michigan State is not one of them. With that in mind, here are the 6 Big Ten Schools With The Best Recruiting Classes So Far:

6. Nebraska Cornhuskers
The Cornhuskers check in at No. 16 in the country, just ahead of Wisconsin. The Huskers have nine players committed, including three four-star recruits. Two of those are high school teammates; QB Tristan Gebbia and WR Keyshawn Johnson.

5. Maryland Terrapins
Maryland's new head coach D.J. Durkin is off to a strong start. The Terrapins have only nine pledges, but one of those is five-star DE Joshua Kaindoh. He's the No. 22 recruit in the nation and is a big reason why Maryland is 15th in the nation.

4. Northwestern Wildcats
The Wildcats generally don't rank highly, but that's not the case right now. The Wildcats have landed 13 recruits already, tied for the most in the Big Ten. Northwestern is just behind Iowa. For more Big Ten recruiting coverage, download the Chat Sports App.

3. Iowa Hawkeyes
Iowa just barely beat out Northwestern, and are in 11th place in the nation. The Hawkeyes have 10 players committed, including a five-star who helped give them the edge over the Wildcats. DE A.J. Epenesa is the No. 17 player in the country.

1. Ohio State Buckeyes
The Buckeyes don't just lead the Big Ten, they're actually in first place among all schools at the moment. The Buckeyes have 13 players committed already, including 10 four-stars and two-five star recruits. The top two recruits are OT Josh Myers (from Ohio) and CB Shaun Wade (from Florida). The Buckeyes aren't done adding talent yet either.