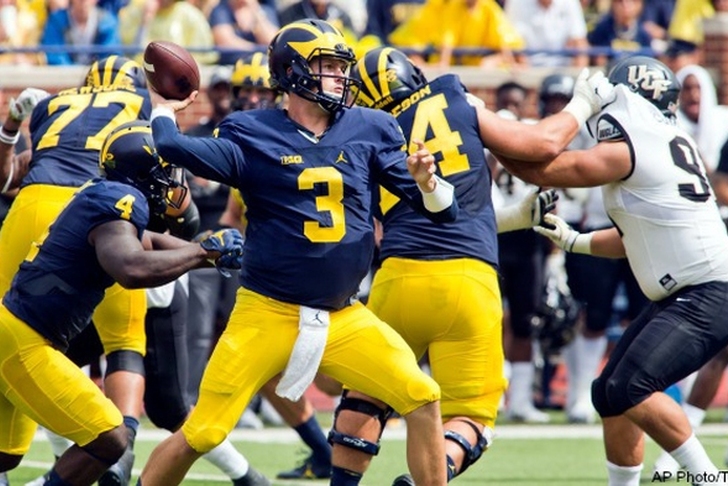 The Big Ten has looked like perhaps the best conference in college football so far this season, as most of their teams - especially the top teams - continue to put forth dominating performances. Here's a look at all the latest happenings around the the league below, but we lead off with our Big Ten Power Rankings heading into Week 3:

14) Northwestern Wildcats (0-2)
The Wildcats were upset by a good Western Michigan team, losing 22-21, but the wheels have fallen off after losing to FCS Illinois State. Is it time to wonder about Pat Fitzgerald's job if they don't turn this around quickly?

13) Purdue Boilermakers (1-1)
Purdue beat Eastern Kentucky, in their opener, then were blasted by Cincinnati, showing this team still has a long way to go.

12) Rutgers Scarlet Knights (1-1)
The Scarlet Knights got trounced on the road by a top-10 Washington team in the opener, then got a win by beating Howard, 52-14, but only after trailing 14-0.

11) Illinois Fighting Illini (1-1)
The season-opening win over Murray State didn't tell us a whole lot about this team, but they looked better than expected in a 48-23 home loss to North Carolina. Still, there is plenty of room for improvement.

10) Maryland Terrapins (2-0)
The Terps have two wins over Howard and FIU. It's nice to have those under their belt, but they really don't tell us anything about this team.

9) Indiana Hoosiers (2-0)
Indiana's defense has carried them this season, forcing three turnovers in each of their first two games. Of course, that's against subpar competition, but it's still impressive.

8) Penn State Nittany Lions (1-1)
Penn State did lose to Pitt, but it was a close game in which the offense showed what they can do by putting up over 400 yards and 39 points. However, they had plenty of problems holding onto the ball, which was the biggest reason for the loss. If they can cut down on turnovers, they'll be an interesting team in the Big Ten.

7) Minnesota Golden Gophers (2-0)
Hooray for Minnesota's offense for showing up! Given, their 58 points did come against Indiana State, but it's a welcome sign for a team that has struggled to move the ball for the past two years.

6) Michigan State Spartans (1-0)
The Spartans had the week off after barely beating Furman. They'll have Notre Dame this week, which will give us a better understanding of what to expect from them this season.

5) Nebraska Cornhuskers (2-0)
Wins over Fresno State and Wyoming are nothing to write home about, but there in plenty of reason for optimism in Lincoln. In Week 1, they beat the Bulldogs by running the football to the tune of 292 yards. This week, they blew out Wyoming by throwing for 412 yards, showing the dual dimensions of this offense.

4) Wisconsin Badgers (2-0)
Beating LSU was HUGE for Wisconsin, and they followed that up with an impressive showing against Akron. Running back Corey Clement appears to be fine after suffering an ankle injury, and with quarterback Bart Houston looking better and better each drive, the Badgers should be a factor in the Big Ten race.

3) Iowa Hawkeyes (2-0)
Iowa still doesn't get the credit they deserve, but two straight blowout wins - including a 42-3 drubbing of Iowa State - show they're still very much one of the best teams in the country..

1) Ohio State Buckeyes (2-0)
Ohio State won their first game by putting up 77 points and over 776 yards of offense. They beat Tulsa in their second game thanks to two pick-sixes, showing their dominance on both sides of the ball. Oh yeah, they're also outscoring opponents 125-13 this season.

OTHER BIG TEN NOTES
Ranked teams
Five Big Ten teams found themselves ranked in Sunday's AP Poll, and all four were in the top 15. Iowa was the lowest ranked team at No. 13, with Michigan State sitting right above them at No. 12 and Wisconsin checking in at No. 9. Ohio State and Michigan also moved up one spot each, and are now ranked No. 3 and No. 4, respectively.

Corey Clement injury
Clement is arguably the best running back in the Big Ten and is the focal point of Wisconsin's offense, so the Badgers were obviously very concerned when he went down with an ankle injury in the first half. However, when speaking with reporters after the game, Clement said he could've returned in the second half but didn't because, well, they didn't need him to beat Akron. He should be find moving forward.

Minnesota players being investigated
Four Gophers football players are being investigated by police for their involvement in an alleged sexual assault. Cornerbacks KiAnte Hardin and Ray Buford, safety Dior Johnson and defensive end Tamarion Johnson were all suspended for Saturday's game against Indiana State.

Conference Player of the Week
Michigan's Wilton Speight won the conference's official award, and we're giving him ours too. He passed for 312 yards and four touchdowns in their win over UCF.

Games of the Week
With a majority of teams playing relatively easy schedules so far, the Big Ten slate steps up in a big way this weekend. Ohio State travels to Norman to take on No. 14 Oklahoma (8 pm ET, FOX) in one of the biggest games in the country, while Michigan State travels to face No. 18 Notre Dame (7:30 pm ET, NBC) and Nebraska hosts No. 22 Oregon (3:30 pm ET, ABC).