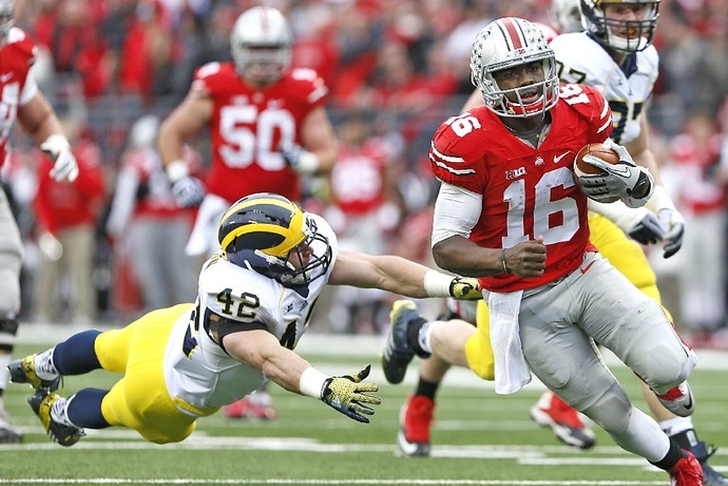 The Big Ten is perhaps the most storied college football conference in the country and have several teams competing at the top of the rankings for a berth in the college football playoff. How do the teams in the Big Ten stack up against each other after the first six weeks of the season? Here's our power rankings:

Purdue hasn't beaten an FBS level team this season, and after their near upset of Michigan State, they fell flat on their face in a blowout loss to Minnesota.

Maryland fired head coach Randy Edsall following another blowout loss, this time to Ohio State. The Terps simply don't have the talent to match up with even above average teams, making this a tough rebuild for whoever takes over the program long-term.

Rutgers nearly shook off their early season woes against Michigan State, but ended up falling to the Spartans in the last minute. While they still don't have anything tangible on their resume, that game was enough to provide hope for the rest of the season.

Mike Riley's Huskers have lost FOUR games in the most brutal of fashions this year -- a Hail Mary to BYU, an aborted OT comeback against Miami, on a touchdown on the last play of scrimmage agaisnt Illinois and on a last-minute field goal today in a game they had salted away against Wisconsin. There's snake-bitten and there's CHOKING in the clutch. Nebraska's season falls in the latter category.

Minnesota was expected to compete for the Big Ten West title this year, but three point victories over Colorado State and Ohio and a 27-0 loss to Northwestern had them trending downward, but the seemed to right the ship against Purdue.

However, their offense is the second-worst in the entire country, averaging just over 15 points per game, and their defense isn't good enough to make up the difference. Expect their problems to get worse as they get deeper into conference play.

Illinois is 4-2 on the season following a nine-point loss to Iowa, and they don't have a single victory they can hang their hat on. However, a disappointing 48-14 loss to North Carolina - along with a below average offense (68th in the country) - suggest they aren't a great team.

Indiana's lone loss of the season came in their seven-point defeat to Ohio State, which was very impressive in its own right. However, their blowout loss at Penn State last weekend does raise questions about how good this team really is.

Wisconsin's only two losses of the season have come to Alabama and a four-point loss to Iowa last weekend, and while both have come against ranked teams, there are some alarming problems facing the Badgers. They rank just 80th in total offense and 79th in scoring offense, showcasing just how putrid they are on that side of the ball - a problem that will keep them from being very effective this year.

Overrated much? The #13 Wildcats came into today's game with #18 Michigan feeling fantastic with a 5-0 record to their credit. They came out of it looking shellshocked and overmatched after taking a 38-0 punch to the jaw from a streaking Wolverines team. For the one person in America who did it as a lark -- cross out Northwestern on your preseason College Football Playoff pick'em office pool sheet.

#22 Iowa's 29-20 win over the Indiana Hoosiers improves their overall record to 6-0 (2-0 Big Ten). With Nebraska and Wisconsin faltering, Iowa appears to be locked in a battle with Northwestern for Big Ten West supremacy. We wouldn't count out the Hawkeyes in that one, ESPECIALLY with RB Jordan Canzeri on their side. Canzeri rushed a bonkers 43 times for 256 yards and a score on Saturday. When you have a durable ground weapon like that, no game is unwinnable.

Plenty of folks wrote off James Franklin's boys after an embarrassing opening week loss at Temple. That was a tad premature. Penn State has rolled off five straight wins since then, including Saturday's 29-7 smothering of a Hoosiers team that took Ohio State to the limit last week. The true test of PSU's resurgence comes next week, however, when they travel to Columbus to face off with the #1 Buckeyes. If they can acquit themselves well there, win or lose, PSU could be destined for a high-level bowl this winter.

MSU has barely beaten the teams they're supposed to annihilate (Purdue, Rutgers), and their banner win at home against Oregon looks not-so-impressive after the Ducks were taken down by lowly Washington State yesterday. Connor Cook has been great and the offense is clicking fine, but the defense is a MAJOR liability. All signs point to disaster when the team visits Ann Arbor next week.

There is no denying it -- the #12 Michigan Wolverines are a full-fledged Big Ten (and dark horse College Football Playoff) contender. They showed as much in a 38-0 beatdown of the formerly-undefeated then-#13 Northwestern Wildcats at the Big House on Saturday behind the play of their historically great defense. Michigan is the first team to shut out three consecutive opponents since the 1995 Kansas State Wildcats. They've outscored their last five opponents by a combined count of 150-14. Jim Harbaugh has Michigan back to playing the bullies and not the bullied. That could very well carry over all the way to a Big Ten title (or even more).

Cardale Jones threw two touchdown passes, J.T. Barrett scored three times and #1 Ohio State stayed unbeaten with a 49-28 home win over Maryland. However, the score line doesn't reveal just how much OSU struggled in this one. Maryland had this game tied at 21-21 in the third quarter before the Buckeyes could shake them off to up the nation's longest winning streak to 19. This is the second straight week that a lesser opponent has tested Ohio State after Indiana put a scare in them last Saturday. However, all that really matters right now is the fact that OSU is still perfect and ups its regular-season conference winning streak to 26.