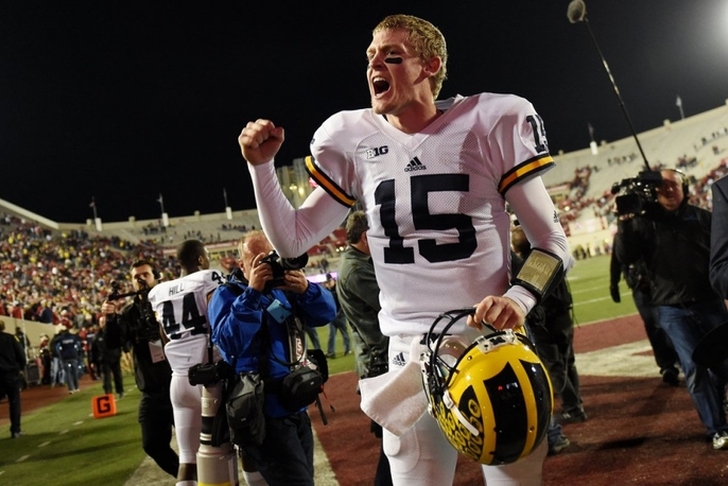 Following the Big Ten's slate of games on November 14th, the conference announced its co-offensive, defensive, and special teams players of the week, along with its freshman of the week on Monday morning. The co-offensive honors go to Michigan Wolverines wide receiver Jehu Chesson and quarterback Jake Rudock.

Rudock connected with Chesson ten times for 207 yards and four touchdowns during the team's 48-41 double-overtime victory at Indiana on Saturday. Rudock completed 33 of 46 passes in total for 440 yards and a school record six touchdowns. It's just the ninth time in Big Ten history that a quarterback has thrown at least six touchdowns, and second since 2004.

As for Chesson, he is the first Big Ten wide receiver since 2003 to record at least 200 yards and four touchdowns. His four TD receptions match a school record set back in 1992.

Michigan State defensive lineman Malik McDowell took home defensive player of the week honors after setting career highs with eight tackles and 4.5 tackles for a loss in the Spartans' 24-7 home win over Maryland. He also registered a forced fumble and a half sack.

Special teams player of the week goes to Indiana kicker Griffin Oakes, who tied a school record with four made field goals to up his field goal conversion rate to a Big Ten-best 88.9 percent. Finally, freshman of the week was awarded to Minnesota's Shannon Brooks. He rushed for 86 yards and a touchdown on 14 carries against Iowa. He also threw his first career touchdown pass (a 42-yard TD), along with adding three catches for 13 yards.