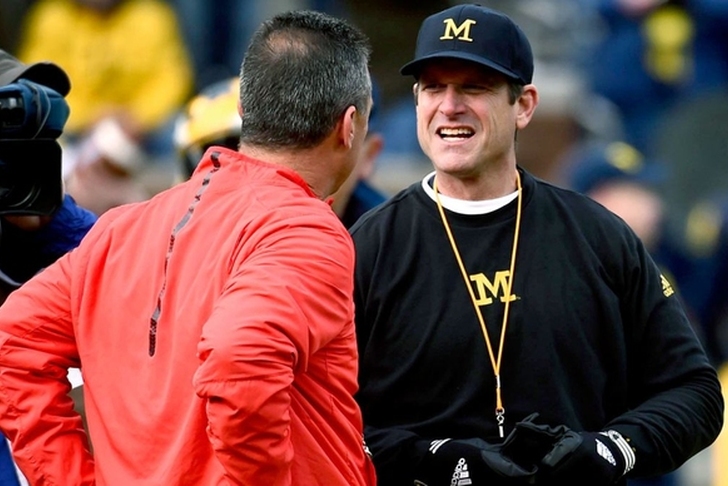 The Big Ten is one of the best conferences in college football. With great recruiters like Jim Harbaugh and Urban Meyer in the conference, it's no surprise that the Big Ten is luring incredible talent. While Michigan and Ohio State are (unsurprisingly) at the top of this this list, several other schools are putting together great classes. This is based on Rivals.com's rankings and every team here has a top 35 class. Signing Day is not here yet, so this list could look very different by the end of the season. With that in mind, here are The 6 Best Recruiting Classes In The Big Ten For 2016:

6. Iowa Hawkeyes
The Hawkeyes just put together a great season on the field and are in the process of turning that into a great year on the recruiting trail. The Hawkeyes don't have any four-star recruits, but 20 of their 24 players are three-stars. The best of the bunch might end up being Toks Akinribade, an athlete with 4.4 speed.

5. Wisconsin Badgers
The Badgers check in at No. 27 overall, the 22 recruits. Three of those are four-star players. Two are lineman, but the best of commits is athlete A.J. Taylor. He's the No. 1 player from Missouri and could play WR.

4. Penn State Nittany Lions
PSU is No. 18 in the nation, with 18 recruits committed. Eight of those players are four-stars and James Franklin has the future looking bright at Penn State. The highest rated player is RB Miles Sanders, but he might not be the most important. Franklin has landed four-star QB Jake Zembiec, the top player from New York.

3. Michigan State Spartans
Thanks to 10 four-star recruits, the Spartans are No. 13 in the nation. MSU might not be done yet with just 18 commits so far. The gem of the class is DE Josh King, who could be the next great Spartan defensive lineman

2. Ohio State Buckeyes
The Buckeyes are No. 3 in the nation, with a five-star recruit and 12 four-stars. Ohio State isn't done yet and they are chasing a few high-profile recruits. However, the best still might end up being DE Nick Bosa. The five-star recruit is the younger brother of current Buckeye Joey Bosa.

1. Michigan Wolverines
The Wolverines already have 23 players committed and are No. 2 in the nation, but aren't done yet. The gem of the class is RB Kareem Walker, who flipped from the Buckeyes. He's one of 11 four-stars. The Wolverines don't have a five-star yet, but are the favorites to land DT Rashan Gary, the No. 1 player in the nation.