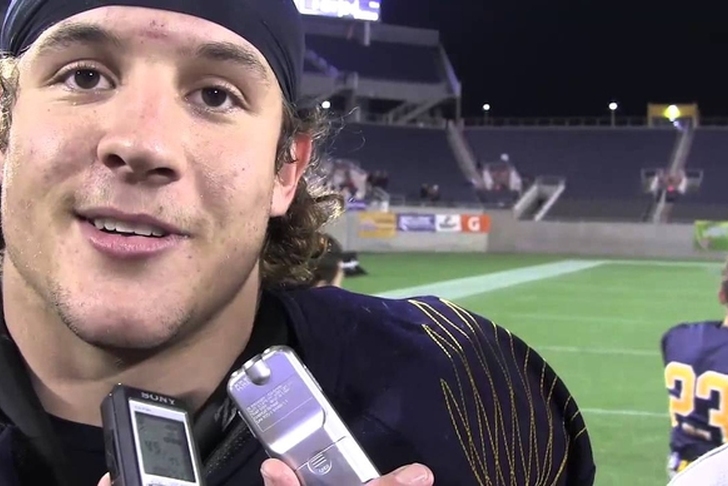 With under a week to go until National Signing Day, it's time to assess what we've already seen from the Big Ten on the recruiting trail. Here's our list of the 10 Best Recruits In Big Ten Football For 2016.

10. Terrance Davis, OG, Maryland
Davis is the #73 player in the Class of 2016 and the third best guard. A four-star recruit, he's the second best player in Maryland and an absolute beast in the trenches.

8. Brandon Peters, QB, Michigan
The four-star QB enrolled at UM in January, getting an early start with Jim Harbaugh's program. He's got great size at 6-foot-5 and an arm that can make any and every throw from the pocket. He came into Ann Arbor ranked as the #61 player in the nation.

7. Demario McCall, APB, Ohio State
The #44 overall recruit and #2 all-purpose back in the class, McCall uses his lack of size to his advantage -- burning through and around defenders while cutting and changing directions on a dime.

6. Shane Simmons, WDE, Penn State
Simmons is a huge get for Penn State's defense, providing edge rushing and the ability to seal the edge while pushing runners to the sideline. He's ranked as the #41 overall player and #4 weak-side defensive end for this cycle.

5. Ben Bredeson, OT, Michigan
Bredeson is a beast at 6-foot-5, 293 pounds. He's almost impossible to move when he sets his feet, and that'll only be more apparent when he begins his weight-lifting program in Ann Arbor. He comes in as the #39 overall player and #5 offensive tackle in the nation. More from the Michigan football recruiting trail inside the Chat Sports iPhone and Android apps!

4. Jonathon Cooper, DE, Ohio State
Cooper would be the top DE for Ohio State, but someone higher on this list outranks him. He's a four-star recruit and the #32 overall player in the nation. He's going to wreak havoc on Big Ten offenses.

3. Michal Menet, OG, Penn State
Menet is the key to Penn State's renaissance on the offensive line, clocking in as the #1 offensive guard in the class. He's the #28 overall recruit for 2016.

1. Nick Bosa, DE, Ohio State
Buckeye fans know that last name well, as Nick is the younger brother of star OSU DE Joey Bosa. The younger Bosa is a five-star recruit and the #1 true DE in the nation. He's the #8 overall recruit and the prize of Ohio State's class.