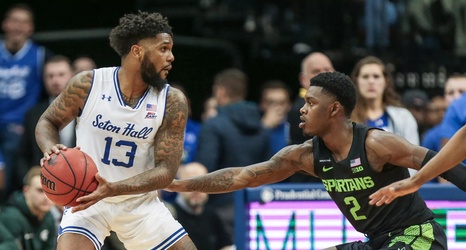 For someone who wasn’t even going to be able to play in the game due to an ankle injury, Myles Powell sure had an incredible performance in Seton Hall’s 76-73 loss to Michigan State Thursday evening in Newark.

The senior guard surprised many people when it was announced that he would be starting just four days after an ankle injury that head coach Kevin Willard warned would lead to a “prolonged absence” for Powell.

Questions about his effectiveness for Seton Hall were answered relatively quickly, as Powell was responsible for six of Seton Hall’s first 11 points, knocking down three free throws and a three pointer early in the first half.