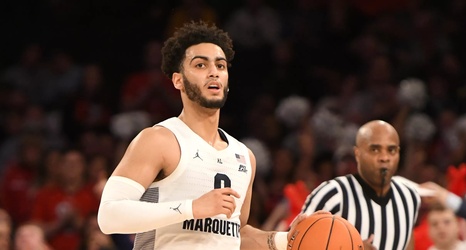 The Golden Eagles star scored 38 points in MU’s season-opening win over the Loyola-MD Greyhounds. And with those 38 points, Howard became the program’s all-time leading scorer as he hit the 1,988-point mark.

Jerel McNeal, who was the program’s all-time leading scorer before Howard’s 38-point outburst, even delivered a congratulatory message to the prodigious hooper:

Tuesday night’s performance for Howard was also the 17th time he’s hit at least 30 points or more in his career. So, yeah, he’s pretty good!

Anyhow, this was a dominant win for Marquette. They never trailed and were up by 21-0 at the 13:49 mark.