Georgetown Uses Strong Second Half to Down Mount St. Mary’s, 81-68 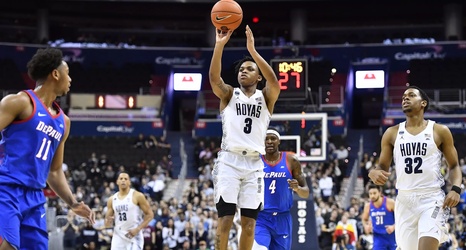 The Georgetown Hoyas (1-0, Big East) utilized a massive second-half offensive outburst to overcome a 19-point deficit against Mount St. Mary’s (0-1, NEC) on Wednesday night in the nation’s capital for an 81-68 victory. J

James Akinjo opened his scoring account just 17 seconds into the new season, drilling a pull-up three-pointer before Omer Yurtseven made a short jumper on the Hoyas’ next possession. This quick five-point lead was not built to last, however, as Mount St. Mary’s buckled down defensively. The Mountaineers were quick in their rotations, and their high-energy half-court defense provided a challenge for a Georgetown team that appeared out of sync throughout the opening stanza.