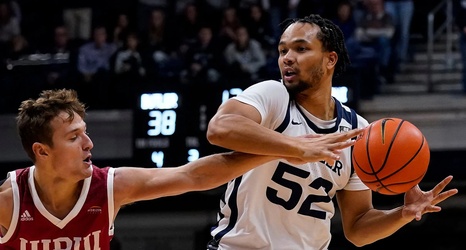 Despite being without Aaron Thompson, the Butler Bulldogs opened the 2021-22 season with a 56-47 over the IUPUI Jaguars Tuesday night at Hinkle Fieldhouse.

The Bulldogs got off to a sluggish start, scoring just ten points over the first ten minutes of action, with five of the ten coming from the free throw line. The second ten minutes certainly went better for the Bulldogs, as they pulled out to a 29-19 lead going into the break. IUPUI went just 1-14 from beyond the arc in the first half, which also helped keep Butler in the game.