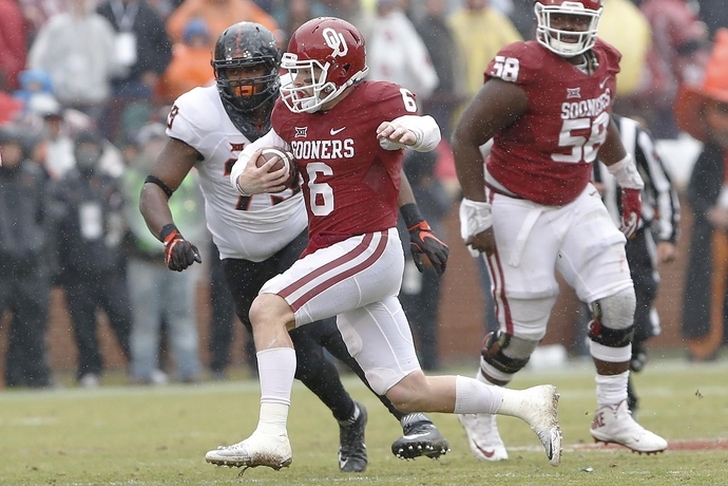 The Big 12 missed out on the College Football Playoff for the second time in three years last season, but thanks to the performances of some of the league's top teams, that isn't expected to happen again. Through the first quarter of the season, the conference also looks deeper than they have in a while. Here are our Big 12 Power Rankings heading into Week 4:

10) Baylor Bears (0-3)
Could Baylor be the worst team in all of FBS? Losses to Liberty, UT-San Antonio, and Duke has not been pretty.

9) Kansas Jayhawks (1-2)
Kansas has a win! Given, it came against FCS-level Southeast Missouri State and the Jayhawks have dismantled by both Central Michigan and Ohio, but it's enough to give them the nod over Baylor. These are clearly the two worst teams in the conference.

8) Iowa State Cyclones (2-1)
Wins over Northern Iowa and Akron are nothing to get too excited about, but there would be much more excitement around this team is they managed to hold on and beat Iowa. Then again, we aren't exactly sure how good the Hawkeyes are just yet. Next Thursday's game against Texas will tell us who this Iowa State team is.

6) Texas Longhorns (1-2)
I will firmly admit that Texas is in this spot because of how good they looked in that loss to USC. Yes, the Longhorns were absolutely terrible against Maryland in the opener, yet it seems like they've already improved by leaps and bounds defensively. Next Thursday's game against Iowa State will determine how legit that improvement is.

5) Kansas State Wildcats (2-1)
That loss to Vanderbilt was ugly in K-State's first game against a Power 5 team this season. Their defense looked great again despite the offensive struggles. Luckily, the Wildcats have a bye week and then a game against Baylor to figure things out on that side of the ball.

4) West Virginia Mountaineers (2-1)
WVU hasn't been tested since their close season-opening loss to Virginia Tech. However, the offense seems to have found their rhythm. A showdown against TCU on Oct. 7 will tell us if they can compete for the Big 12 title.

3) #16 TCU Horned Frogs (3-0)
Speaking of TCU, their dominant win over Arkansas in Week 2 really turned some heads. Now that their defense is playing at a high level (just 14.3 points allowed per game), they look like legitimate contenders in the conference. They'll get their chance to prove themselves Saturday against Oklahoma State.

2) #6 Oklahoma State Cowboys (3-0)
Mason Rudolph and the Cowboys have looked incredible to this point in the season, turning him into a bonafide Heisman candidate. They passed their first test against Pitt last week and get another in TCU this weekend. Win that game and the hype train will only pick up more steam.

1) #3 Oklahoma Sooners (3-0)
No one has a hype train like Baker Mayfield and Oklahoma. We were unsure what to think of the Sooners this year given the talent they lost at the skill positions this offseason, but the convincing win at Ohio State shows that they're a legitimate national title contender. OU will hold this top spot until they lose.

Follow our Big 12 page for all the latest Big 12 football news!