Oklahoma Cancels Sooner Schooner for Rest of Season After Flipping over vs. WVU 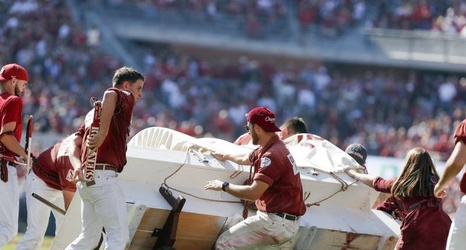 Jalen Hurts and the Oklahoma Sooners will have to compete for a Heisman Trophy, Big 12 Championship and spot in the College Football Playoff without one of their widely known traditions for the rest of the season.

Senior associate athletic director Kenny Mossman said the Sooner Schooner, which comes on the field after every score by Oklahoma when it plays at home, will not be used in traditional fashion for the rest of the season after the crash during Saturday's 52-14 win over West Virginia.

"We will repair the damaged Schooner and its future use will be for static display," Mossman said in a statement, per George Stoia of the OU Daily.