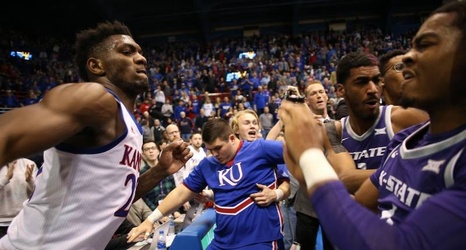 Kansas men's basketball sophomore forward Silvio De Sousa has been suspended indefinitely by head coach Bill Self for his role in a brawl between KU and Kansas State near the end of the Jayhawks' 81-60 home win Tuesday.

"I have suspended Silvio De Sousa indefinitely pending the final outcome of the review by KU and the Big 12 Conference," Self announced Wednesday, per Gary Bedore of the Kansas City Star. "As I said last night, we are disappointed in his actions and there is no place in the game for that behavior.