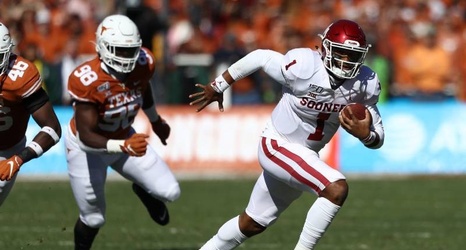 Heisman Trophy contender Jalen Hurts accounted for four touchdowns Saturday to help lead the No. 6 Oklahoma Sooners to a 34-27 Red River Showdown victory over fellow Heisman hopeful Sam Ehlinger and the No. 11 Texas Longhorns at the Cotton Bowl in Dallas.

Oklahoma improved to 6-0 in mostly dominant fashion. The Sooners had outscored opponents 301-122 with at least 45 points in every game before Saturday. It's moved them firmly into the College Football Playoff conversation with a favorable second-half schedule.

Texas dropped to 4-2. The Longhorns also lost in Week 2 to the LSU Tigers.