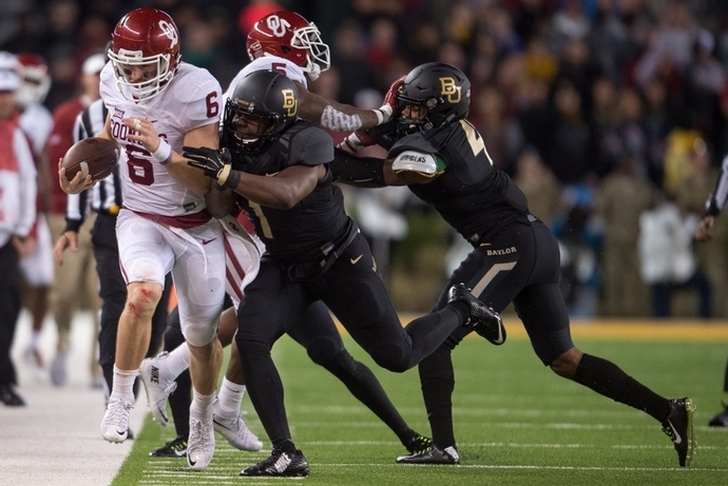 The college football season is just days away, and several Big 12 teams - and coaches - are facing make-or-break years, hoping to make a big surge up the standings. How do they all stack up against each other going into the new year? Here's our preseason Big 12 power rankings:

10. Kansas Jayhawks
Kansas failed to win a game last season, making this is an easy choice. The Jayhawks should be better this season, but they have nowhere to go but up.

9. Iowa State Cyclones
The Cyclones hired Toledo's Matt Campbell, which could pay dividends in the future. But Iowa State needs a lot of help and it could be a few seasons before they rank higher.

8. Kansas State Wildcats
This is where things get tricky. The difference between the No. 8 and No. 5 teams in the Big 12 is not a large one. The defense should be solid, but questions on the offensive side could hold this team back. The Wildcats will fight for a bowl game, but a run at a Big 12 title seems unlikely.

7. West Virginia Mountaineers
The pressure is on Dana Holgorsen, after West Virginia had to issue a statement saying he'd back this year amid questions about his job. WVU will be without RB Wendell Smallwood, a loss that could hurt. But even worse is the loss of a good chunk of one of the Big 12's top defense. WVU looks like a bowl team, but there might be some regression.

5. Texas Longhorns
Which Texas team will we get this year? The one that lost to Iowa State, or the one that beat Oklahoma? The Longhorns defense should be loaded, but the team will be determined by the offense. Can young offensive coordinator Sterlin Gilbert and true freshman QB Shane Buechele save Charlie Strong's job?

4. Baylor Bears
What to do with Baylor? Had the sexual assault scandal not caused complete chaos and cost Art Briles his job, Baylor would be No. 2. We'll drop them to No. 4 to start the season, but if they can rally around each other, a Big 12 title is a possibility. Of course, if things fall apart they could regress to being a Big 12 bottom feeder.

3. TCU Horned Frogs
TCU lost a lot of talent, including QB Trevone Boykin. While Kenny Hill will likely take over at QB, the Horned Frogs will miss Boykin and the rest of the departed talent. But plenty of injuries last year mean the new starters have experience. The Horned Frogs might not win the Big 12 title, but they'll be a dangerous team.

2. Oklahoma State Cowboys
The Cowboys don't get as much love as the other team in Oklahoma, but they still started the season 10-0 last year. The Cowboys return QB Mason Rudolph and will be a Big 12 threat again this year.

1. Oklahoma Sooners
This one is pretty easy. OU is a national title threat and made it to the College Football Playoff last year, and it doesn't seem like anyone in the conference will be able to match them. The Sooners face a tough schedule, but the offense is going to be loaded again this year.