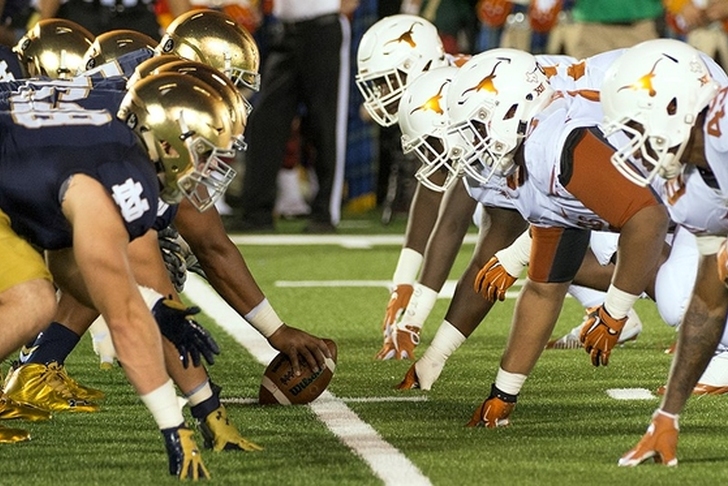 College football is unique in that a single loss could mean the difference between a conference championship, a College Football Playoff spot or ending up in an average bowl game. The Big 12 is hoping to finally send a team to the College Football Playoff game, but have several non-conference games that could dash those dreams. With that in mind, here are the Big 12's seven most important non-conference football games in 2016.

7) Iowa State Cyclones at Iowa Hawkeyes - Sept. 10
Iowa State is not a very good football team, but if new head coach Matt Campbell can lead them to a victory over the reigning Big Ten West champs, the Cyclones could be a factor in the conference this year.

6) Texas Tech Red Raiders at Arizona State Sun Devils - Sept. 10
Kliff Kingsbury needs to have a breakout season soon with the Red Raiders, and he may be out of a job if Texas Tech struggles. Beating Arizona State, a program that has experienced some success in recent years, will be a good gauge of where Texas Tech stands in the Big 12 pecking order this year.

5) Kansas State Wildcats at Stanford Cardinal - Sept. 2
Stanford expects to compete for a College Football Playoff berth this season, and with such high expectations, they're going to come out ready to play in their home opener. However, if Kansas State can put up a good fight - or even pull off the upset - they will prove to be a threat in the Big 12 race.

4) Arkansas Razorbacks at TCU Horned Frogs - Sept. 10
TCU is expected to take a step back this season, but beating a very good Arkansas team will prove that this team is for real. Texas A&M quarterback transfer Kenny Hill will likely be tasked with leading the Horned Frogs, and his play will be key to their success.

3) Notre Dame Fighting Irish at Texas Longhorns - Sept. 4
Notre Dame blew out Texas last year, and it's unclear if this matchup will be any different. Texas has a brand new offense, and could start a true freshman QB in Shane Buechele. Playing at home should help Texas. With no NFL in this week, this game is on Sunday.

2) Oklahoma Sooners at Houston Cougars - Sept. 3
Don't sleep on Houston. The Cougars beat Florida to end the season, and they're a CFP dark horse. Oklahoma is the Big 12 favorite and this could end up serving as Week 1 College Football Playoff elimination game. The Sooners are actually going to Houston for this one and it's the ideal way to start the first Saturday of college football.

The winner of this game will probably end up in the top two or three of the rankings and put themselves in prime position for the playoff, while the loser will have to go undefeated in conference play to ensure a spot in the playoff. Stakes this high should make for a great game.