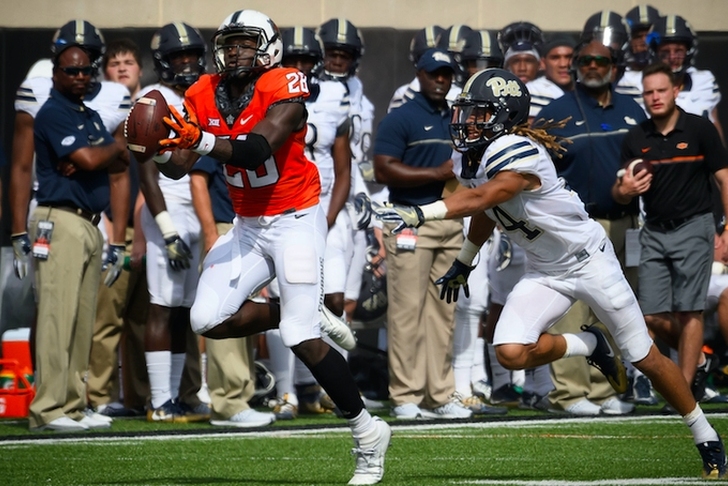 The Big 12 has had a rough start to the season, and it didn't get any better this past weekend as both Texas and Oklahoma lost. Here's our Big 12 Power Rankings heading into Week 4, along with the latest news and rumors from around the conference:

10. Iowa State Cyclones (0-3)
The Cyclones played their best ball of the season on Saturday, yet still lost handily to TCU. This program has a long ways to go.

9. Kansas Jayhawks (1-2)
Kansas turned it over six times and lost 43-7 to a rebuilding Memphis team. Yikes.

8. Texas Tech Red Raiders (2-1)
Patrick Mahomes (507 total yards, six TDs) and the Texas Tech offense did their thing, putting up 59 points in their win over Louisiana Tech. The bad news? The defense still gave up 45 points...to Louisiana Tech. They need to improve on that side of the ball if they're going to do anything.

7. TCU Horned Frogs (2-1)
Yes, TCU got back on track by picking up a conference win, but once again struggled early - this time against Iowa State. We still need to see more from them.

6. Kansas State Wildcats (1-1)
K-State got a solid 63-7 win over FAU after a bye week. They still get bonus points for playing tough against Stanford.

5. Oklahoma Sooners (1-2)
Oklahoma is doing very Oklahoma things, failing to deliver on preseason expectations. They were absolutely dismantled against Ohio State, but the lack of notable wins by other teams below them keeps them in the top half of the conference.

4. West Virginia Mountaineers (2-0)
A 2-0 start with wins over Mizzou and Youngstown State are good enough to put WVU in the No. 4 spot in the conference, but they won't crack the top three until they get tested.

3. Texas Longhorns (2-1)
The loss to Cal was disappointing, sure (especially the part about giving up 50 points), but overall, this Texas team has been impressive. Plus, they still have that Notre Dame win to hang their hat on.

2. Oklahoma State Cowboys (2-1)
The Cowboys bounced back from the Central Michigan fiasco in a big way, knocking off a very good Pitt team at home. That's an encouraging step forward for this team, who are looking to prove that loss was a fluke.

1. Baylor Bears (3-0)
Wins against Northwestern State, SMU and Rice are nice, but none of them move the meter. Still, it's enough to keep them in the top spot in the Big 12.

OTHER BIG 12 NOTES
Ranked teams
Just three Big 12 teams are ranked in the top 25, yet none crack the top 15. Oklahoma tumbled all the way to No. 25 after their loss to Ohio State, while Texas dropped to No. 21. Baylor is the highest-ranked team at No. 16

Expansion update
While the Big 12 is still considering expansion ahead of the Big 12 president's meeting in October, they are reportedly discussing adding just "football only" members to the conference:

Heard from a source today that the notion of "football only" members being added to the Big 12 is gaining some traction.

Conference Players of the Week
The Big 12 announced the following players of the week for their performances over the weekend:

Games of the Week
A good number of Big 12 teams have byes this weekend before the full start of conference play, but there are still several marquee matchups worth noting. Here are the best of the best for the coming weekend: