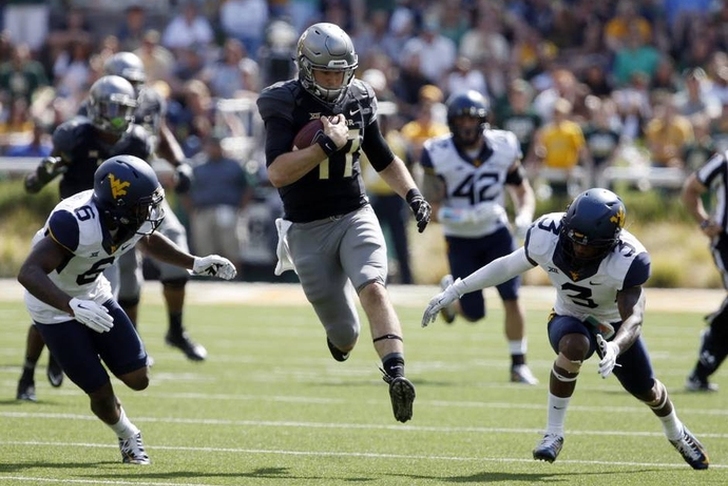 The Big 12 doesn't actually have 12 teams, but it's still a conference with star power and several teams tat are competing for a berth in the college football playoff. So how do the teams in the Big 12 stack up against each other after the first seven weeks of the season? Here's our power rankings:

Kansas has yet to beat a team this season, and it's likely the Jayhawks won't win a game at all this year. Expect Kansas to remain in the cellar all season.

Iowa State's two wins are over Kansas and Northern Iowa, so they don't deserve a ranking higher than ninth. That could change if they beat someone else this season, but they'll be underdogs in every game they play.

This is where the rankings start to get a bit muddled. WVU has three losses, but they've all come against ranked teams in Oklahoma State, Oklahoma and Baylor. With TCU up next, the Mountaineers could start the season 0-4 in Big 12 play. I still believe WVU is a solid team, so they'll likely finish much higher than this.

Things looked promising for Kansas State after close losses to TCU and Oklahoma State. And then the Wildcats were blown out by Oklahoma. A game next week against Texas will help determine just how good this KSU team is.

Texas saved its season with a win over Oklahoma, but must follow that up with a win over Kansas State this weekend. I'm cautiously optimistic about this team, but I do have concerns. The biggest of which is an offense that has produced the fewest points in the Big 12, excluding Kansas.

A close win over Kansas is worrisome, but the Red Raiders are still 5-2. That can't be discounted, and a game against Oklahoma this weekend is chance for Texas Tech to prove it belongs at the top of the Big 12.

6-0 is 6-0, but there is a reason Oklahoma State isn't in the Top 10 in the national polls. The Cowboys have yet to beat a truly tough opponent, and really should have lost to Texas. Questionable calls and special teams gaffes by Texas handed the Cowboys a win. The only reason Oklahoma State is behind Oklahoma is because I believe the Sooners would win a head-to-head matchup right now. There's a convincing argument that the Cowboys should be No. 3, but I prefer the Sooners at this point.

Had Oklahoma not followed up an upset at the hands of Texas with a crushing win over Kansas State, OU likely wouldn't be No. 3. However, I believe Oklahoma is the third-best team in the Big 12 and that's why they are above Oklahoma State. The Sooners still control their own destiny and can make a run at the Big 12 title.

TCU's offense is great, but the defense has been plagued by injuries. The Horned Frogs have escaped with wins over Texas Tech and Kansas State, and their luck will eventually run out if the defense doesn't improve.

The No. 1 team in the Big 12, without a doubt in my mind, is Baylor. The defense is one of the best in the Big 12 and the same is true of the offense. Behind QB Seth Russell, head coach Art Briles has the Bears in the driver's seat for a College Football Playoff bid.