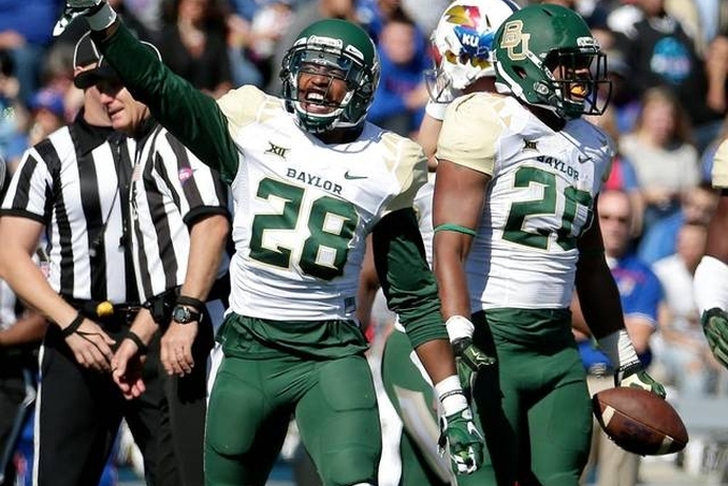 The Big 12 is perhaps the most storied college football conference in the country and have several teams competing at the top of the rankings for a berth in the college football playoff. How do the teams in the Big 12 stack up against each other six weeks into the season? Here's our power rankings:

The Jayhawks are 0-5 after Saturday's 66-7 loss to Baylor in large part to the 644 yards of total offense they gave up to the Bears. Two quarterbacks (Seth Russell, Jarrett Stidham) threw five combined touchdowns against a Jayhawks secondary which wouldn't be able to hack it in Texas prep football, let alone in the Big 12.

Iowa State didn't have high expectations coming into this season, but they've fallen short of those this season. The Cyclones did beat Kansas, but losses to Iowa and Toledo - along with last weekend's drubbing at the hands of Texas Tech, keep them in the No. 9 spot.

Just one week after Texas suffered perhaps the most embarrassing defeat of the Charlie Strong era to TCU, the Longhorns pulled off the biggest stunner of the college football season to this point with a 24-17 victory over bitter rival, and #10 ranked, Oklahoma. The Longhorns limited one of the nation's most prolific offenses to just 278 yards. That's a more-than-impressive feat, considering this is the same Texas team that got punted 50-7 by TCU last week.

The Longhorns move to 2-4 with this win and, while all may not be right in Austin, Strong can point to this epic Red River Rivalry win as reason enough to be granted a third season with the team.

Kansas State had a real chance to make a statement on Saturday by holding a 20+ point lead over TCU, but they fell apart down the stretch. After an unimpressive non-conference schedule, they've started conference play 0-2 with close losses to Oklahoma State and the Horned Frogs.

The Mountaineers also don't have a win in Big 12 play after losing a winnable game at Oklahoma and falling in overtime to Oklahoma State last weekend. Up next are consecutive road games against Baylor and TCU, which doesn't bode well for WVU.

Texas Tech nearly (and should've) upset TCU and fell to Baylor, but got their season back on track with a blowout win over Iowa State. Now at 4-2, the Red Raiders have a real chance at challenging Oklahoma and Oklahoma State for the No. 3 spot in the conference.

The #10 Sooners were picked by many to roll over the Texas Longhorns by approximately a KAJILLION points on Saturday - that didn't happen. Oklahoma's run game forgot to show up at the Cotton Bowl in a demoralizing 24-17 loss to a Texas team that already has had a litany of eulogies written for its season. Boo(ooooooooooo)mer....

Oklahoma State has snuck by an awful Texas team, a middling MAC team in Central Michigan and a Kansas State team that used a WR at QB for much of the game. They did beat West Virginia on Saturday, but it's a down year out in Morgantown. There isn't a Power 5 team that is undefeated with a less impressive resume - but still, they're undefeated, and that counts for something.

After escaping a near upset at the hands of Kansas State, TCU has won 14 straight games over the past two years, despite a myriad of injuries on the defensive side of the ball in 2015. QB Trevone Boykin added another four total touchdowns to his staggering total of 25 over six games and the offense is playing at an extremely high level. Right now, they might be playing as well as anyone else in the country.

We've had TCU in this spot all season, but Baylor now gets the nod over the Horned Frogs because of how well they've been playing.

We had #3 Baylor putting 70 on Kansas today, but a 66-7 win will do just the same. The Bears amassed 644 yards of total offense against the Jayhawks, including 363 combined passing yards and five touchdowns (with no interceptions) by QBs Seth Russell and Jarrett Stidham. With OU's horrible day at the Cotton Bowl and TCU's struggles against Kansas State, Baylor appears to be the class of the Big 12 and maybe the nation.