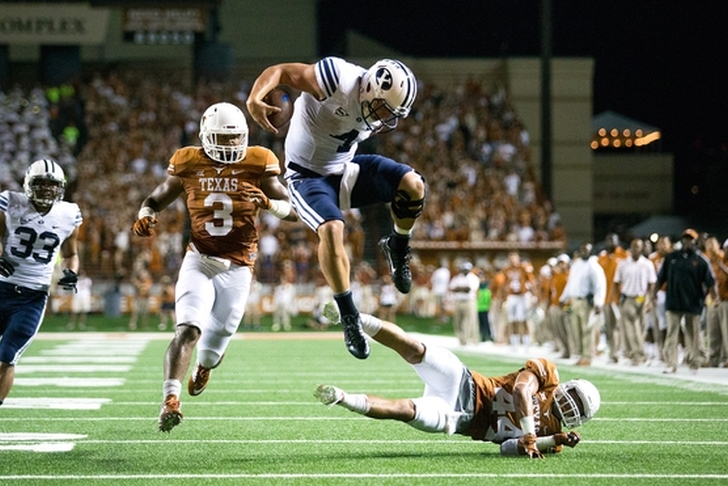 Big 12 expansion is coming. Or at least that's what's being reported, with SI.com calling it "a near-certainty." The question remains though - which schools will the Big 12 add and how many schools will join the conference?

There are plenty of other options, from dark horses like South Florida, Central Florida, Colorado State and Memphis to longshots like Tulane, Temple and San Diego State and even delusional teams like Northern Illinois (seriously). The Big 12 would love to add a Florida State, but that's not happening. With that in mind, here are the 5 most likely candidates for Big 12 expansion.

5. Houston Cougars
In regard to football and location, there isn't a better fit than Houston. They've got a great coach in Tom Herman and a great TV market in Houston. However, will the other Big 12 teams in Texas want to add Houston? Putting the Cougars could allow them to leap over a few programs and that's why they're fifth.

4. Boise State Broncos
This one makes some sense, but also is a bit unlikely to happen (maybe even more so than Houston). Boise State fits well in terms of sheer football talent, but that might be it. They're far away from the Big 12 in geographic terms and don't have much of a TV market. Boise State is behind the clear-cut three favorites. If the Big 12 adds four schools instead of two, Memphis, Colorado State or one of the Florida schools (for recruiting and TV markets) could get the nod.

3. Connecticut Huskies
UConn is one of the three main favorites. UConn has the best non-football offerings, in terms of other sports like basketball and academics. There's also the allure of getting into the New York TV market, which is huge if the Big 12 wants its own ACC-like TV deal. The location isn't ideal, but it's close enough to West Virginia.

2. Cincinnati Bearcats
The Bearcats have openly advocated for Big 12 membership. They want it badly and they make sense as a partner. They have a decent TV market, although Ohio State still dominates Ohio, even in Cincinnati. The Bearcats have a good enough football program and solid academics. They'd also provide the desired close rival for West Virginia and give a recruiting boost. However, UC does have a football stadium issue. Despite upgrades, it's still a bit on the small side. UC and UConn might fight for the last spot.

1. BYU Cougars
BYU is without a conference, making them logical fit. They aren't that close to the rest of the Big 12 in location, but they're close enough. Plus, they have the football prowess and academics the Big 12 wants. Football is king, but BYU doesn't play sports on Sundays, which could be an issue for other sports. But adding BYU (and even another school like UConn) would make that less of an issue.