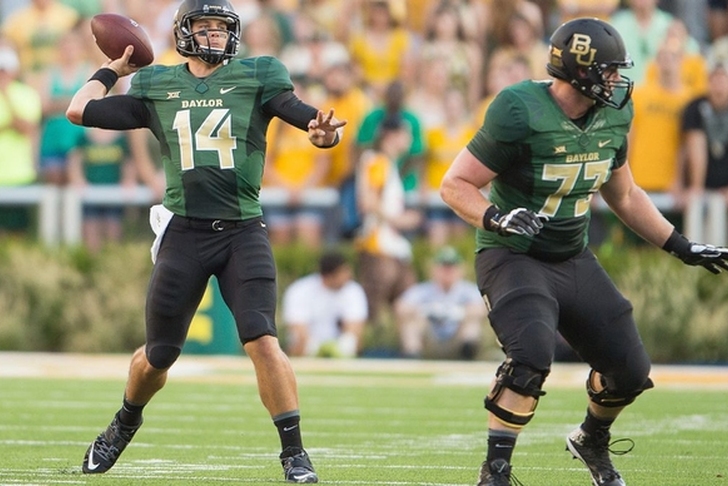 Big 12 Football is as stacked quality-wise as it's ever been, with a handful of teams emerging as both conference title contenders and College Football Playoff threats. These next four teams are the best of what has become the best conference in the nation. Here's the 4 Big 12 Teams With The Best Chance Of Making A New Year's Six Bowl. Oklahoma State's offense gets unjustly criticized in the shadow of all of the high-wire acts surrounding them in the Big 12. OSU has actually been just as serviceable on offense as they have been on defense, scoring 2.52 points per drive (30th in the NCAA) while giving up 1.48 points per drive on D (28th).

OSU is well-balanced and they do have the luxury of playing Oklahoma, Baylor, and TCU all at home. But, there's not enough oomph on either side of the ball to suggest they'll run the table in those games. Still -- they could feasibly go 1-2 in those games and still sneak into a New Year's Six bowl if they win out elsewhere.

TCU is the most dangerous offensive team in the nation, with the combination of QB Trevone Boykin and WR Josh Doctson putting up pinball machine-tilting numbers during the team's 6-0 start. The defense has its issues, but there's enough firepower on the other side of the ball to offset that most days.

The critical factor in TCU not occupying the #1 or #2 spot is the fact that they have games left against all three of the other teams on this countdown, two of those on the road. Their season-closing couplet of Oklahoma and Baylor could prove the undoing of their New Year's Six (and College Football Playoff hopes).

You might find it weird that Oklahoma is ahead of TCU on our list considering a) TCU is undefeated, b) Oklahoma is not, and c) OU just took a shocking punch to the chin in last week's loss to Texas. However, OU's next four games set up well (at Kansas State, Texas Tech, @ Kansas, Iowa State) for them to head into November 14th's road game at Baylor at either 7-2 or 8-1. The key here is that the Sooners get TCU at home a week later.

The Horned Frogs' defense has been hanging by a thread all year long and will likely be gassed by the time we get to late November. QB Baker Mayfield should be able to go nuts against a suspect TCU secondary, reinserting OU in the Big 12 race with a win and helping them close the gap on a New Year's Six bowl berth.

Baylor is the best team in the Big 12, and it may not be that close. Now, they haven't really played anyone other than Texas Tech who they beat in a 56-31 shootout. That's misleading though because Baylor is built to outlast anyone and everyone they come across. They've got the running game to control the clock when they're clinging to a lead. They've got Seth Russell who can sling it with the best and brightest QBs the nation has to offer. Their defense bends a fair amount, but they more than make up for it in third-down stops, punts forced and turnovers.

The Bears are built for College Football Playoff-level competition. It'll be tough to get there with a three-game death stretch of Oklahoma (home), Oklahoma State (road), and TCU (road) late in the season. If anyone can handle it, though, it's Art Briles' boys.