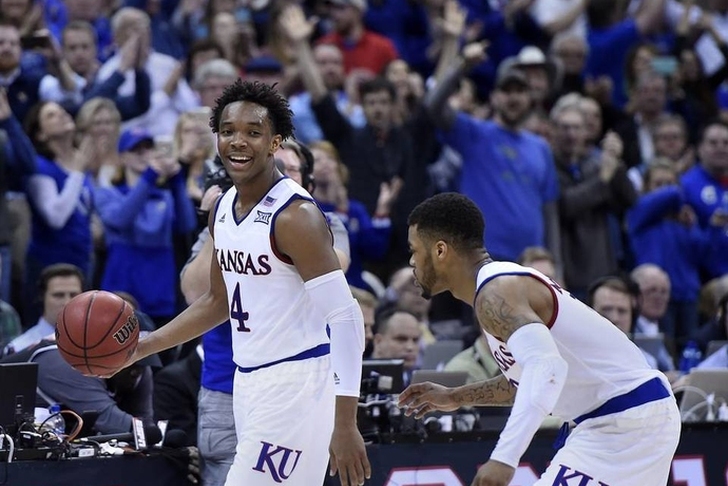 The Big 12 Conference might be known as a football conference, but they flexed their collective basketball muscle last season as seven of the 10 teams made the NCAA Tournament last year. The conference may be even deeper this season, but can anyone keep Kansas from winning the regular season title for the 13th straight year? Here's a complete preview of the Big 12 for the 2016-17 season:

Projected Standings
1) Kansas Jayhawks
No surprise here. The Jayhawks will win the Big 12 yet again this season, and there really isn’t anyone who can stop them.

Five rotation players — including three starters — return from last year’s 33-win team, and they are being joined by the nation’s top recruit in Josh Jackson and five-star center Udoka Azubuike. Frank Mason III and Devonte’ Graham (who will have one of the biggest breakout seasons in the country) give the Jayhawks perhaps the best backcourt in the country, while Landen Lucas and Carlton Bragg Jr. give them experience in the frontcourt.

Kansas is dominant at every position, and will stay as one of the top five teams in the country all season long. It will be a shock if they lose more than one or two games in Big 12 play.

2) Texas Longhorns
After Kansas, there’s a pretty big drop in the conference. However, Texas is still a very good team and will surprise a lot of people. 62 percent of their scoring from last year’s team is gone, but that may be a good thing. Big men Prince Ibeh, Connor Lammert and Cameron Ridley all graduated, and iso-heavy point guard Isaiah Taylor went pro.

Those players kept head coach Shaka Smart from implementing the up-tempo, press defense “HAVOC” system that make him so successful at VCU, and now he has a roster that fits that system. A star-studded recruiting class is headlined by five-star center Jarrett Allen, who has drawn comparisons to former Texas big man Myles Turner. If he has the impact that everyone expects him to, the Longhorns will be very tough to beat.

3) Iowa State Cyclones
Iowa State lost star forward Georges Niang — who was a program staple for four years — along with Abdel Nader and Jameel McKay, but head coach Steve Prohm still has plenty of stars to work with.

Point guard Monte Morris is one of the best playmakers in the entire country, and sharpshooters Naz Long and Matt Thomas are also back. Powerful guard Deonte Burton appears to be in line for a breakout season as a senior, and those four should be able to keep the Cyclones competitive while transfer forwards Merrill Holden and Darrell Bowie and guard Donovan Jackson acclimate to the system.

ISU is counting on those transfers (and freshman Jakolby Long) to provide much-needed depth. If they can provide it, Iowa State may be headed back to the Sweet 16.

4) West Virginia Mountaineers
West Virginia exceeded all of their expectations last season, and they may very well do that same this season in Bob Huggins’ press defensive system. This year, they’re not going to sneak up on anybody. Six of their top nine players return, headlined by guards Jevon Carter and Daxter Miles, Jr.

Huggins always seems to get the best out of his players and does more with less than anyone in the conference. In what will be a muddled middle of the conference, their experience and defense will give them an advantage.

5) Texas Tech Red Raiders
After leading Texas Tech to the NCAA Tournament last season, head coach Tubby Smith surprisingly bolted to take the team coaching job at Memphis. Chris Beard has taken over that job after leading Arkansas-Little Rock to the Round of 32 in last year’s tournament, and he has plenty of talent to work with.

The Red Raiders lost three players to graduation, but are replacing them with three graduate transfers and three JUCO signees. They are also one of the most experienced teams in the country with 13 upperclassmen, which gives them valuable experience. Plus, they have five players who are 6-foot-8 or taller, giving a lot of size many other teams lack.

Beard, a member of the Bob Knight coaching tree, makes his mark by coaching excellent defenses. Texas Tech will be one of the best teams in the country on that end of the court, and will bolster them in Big 12 play.

6) Baylor Bears
Baylor is going through a big transition period in head coach Scott Drew’s 14th season at Waco. First-round pick Taurean Prince, forward Rico Gathers and point guard Lester Medford are all gone, but have a players ready to step up and take their place. Sophomore Al Freeman and senior Ishmail Wainright give them a solid backcourt, and they are counting on forward Johnathan Motley to step up and become more of an offensive force.

Those three will give them a solid nucleus, but they are largely unproven outside of that. Depth may also be an issue.

They have a gift in sharpshooter Phil Forte getting another year of eligibility due to an elbow injury he suffered last season, and he is joined in the backcourt by Jawun Evans, who won Big 12 Freshman of the Year a season ago.

Oklahoma State lacks a lot of size and doesn’t really have any proven depth, but Underwood knows how to make the most of the talent he has on the roster — and Forte and Evans will carry this group to a few wins by themselves.

This team will be a far cry from the one that made the Final Four last season. Starters Jordan Woodard and Khadeem Lattin are being counted on to step up and be the stars of this year’s team, and much is expected from four-star freshman guard Kameron McGusty. Outside of them, it’s mostly unproven players — and if that trio doesn’t step up, this team will struggle.

9) TCU Horned Frogs
New head coach Jamie Dixon left a successful tenure at Pitt for his alma mater, but he doesn’t have a whole lot to work worth. Four-star freshman guard Jaylen Fisher will start immediately, and will be relied on to carry most of the scoring load offensively.

There’s no doubt this team will struggle offensively. They finished 320th in the country offensive efficiency last season, and the team’s leading scorer last year, Chauncey Collins, left to play overseas. But if Dixon brings his patented defensive prowess to TCU, that will be enough to keep them out of the Big 12 basement.

10) Kansas State Wildcats
This will likely be Bruce Weber’s final season in Manhattan. K-State’s Big 12 record has gotten worse in each of the last four year’s under Weber, and that will continue this season.

Freshman forward Xavier Sneed looks like the real deal and will be the focal point of the offense. Outside of him, this team has virtually no offensive weapons. With no reliable defense to fall back on, the Wildcats will struggle.

Player of the Year/Freshman of the Year: Josh Jackson, SF, Kansas Jayhawks 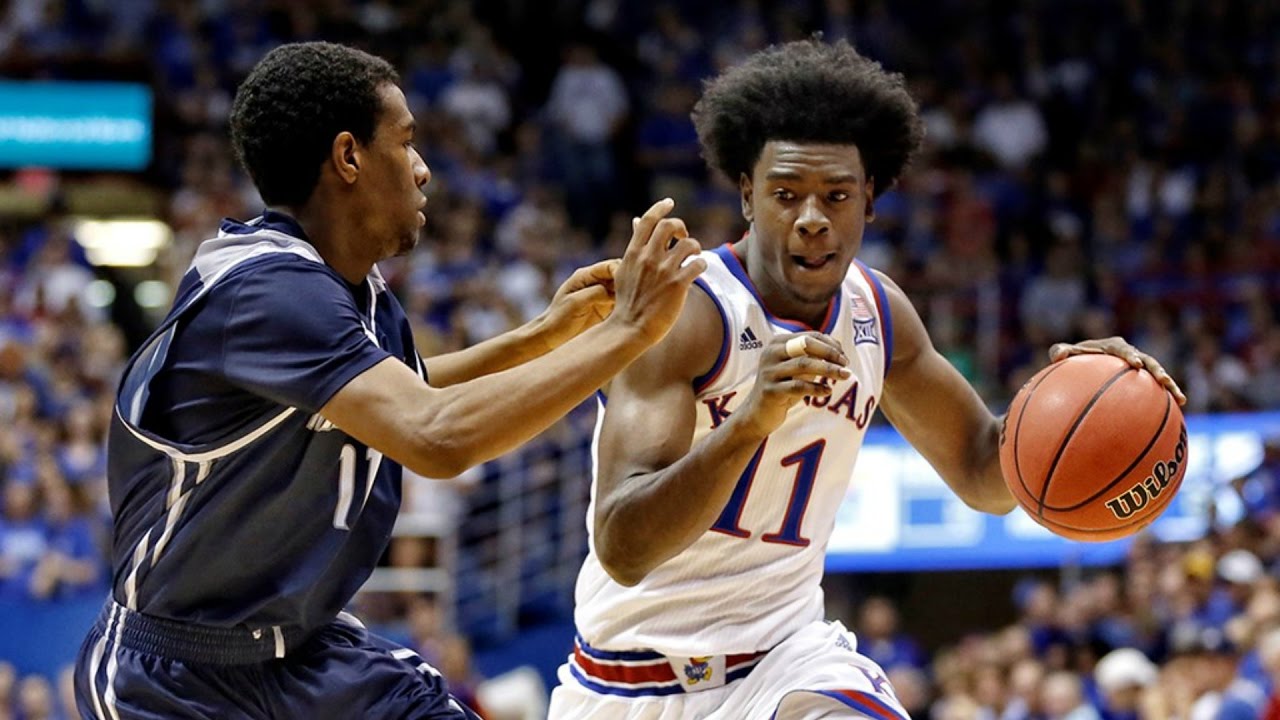 Jackson needs to add a bit more muscle to his 6-foot-8, 203-pound frame, but that’s about the only negative thing you can say about Jackson’s game.

He’s as athletic as anyone in the country and is great at breaking down his defender in one-one-one situations. Attacking the basket is no problem, and he can finish in a variety of ways. That alone makes him similar to a lot of other top prospects in past years, but it’s everything else that he also has in his game that makes him special.

In college, players are usually either slashers or shooters. Very rarely do you find the explosive athlete with a polished jumper, but that’s Jackson. He knocks down long-range shots with ease, and while he isn’t an elite shooter, he will make you pay if you give him some space. Jackson also has the passing and ball-handling abilities to play point forward, making him that much more valuable.

Jackson is the obvious choice for conference freshman of the year, and as Kansas wins yet another Big 12 title, their best player will win conference player of the year. Jackson is already that player, and he’s only going to get better throughout the season.

Bill Self could very easily win this award every year, but there has become a recent trend of giving this award to the team that challenges Kansas the most (considering how good Kansas is expected to be every year). The Longhorns are expected to make a big jump up the rankings in Smart’s second year with the program, and he know has a group that is capable of running his “HAVOC” press defense system — which Texas didn’t use last year. With a good season thanks in part to Smart’s system, he should win Coach of the Year.