What Did Dave Bliss Do Wrong At Baylor And Where Is He Now? 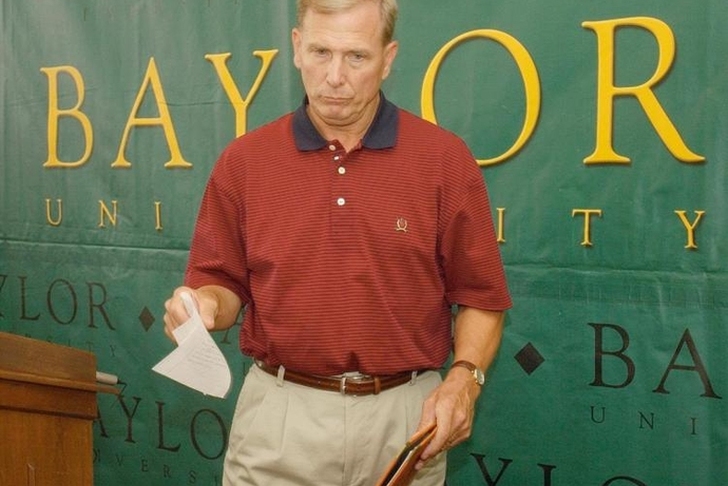 Showtime's "Disgraced," a documentary special on the murder of Baylor Bears basketball player Patrick Dennehy and the scandal that unfolded from it, airs at 9 p.m. ET Friday. The show will focus on Dennehy's murder by his teammate, Carlton Dotson, and the accusations against Dennehy that came from Baylor and men's basketball head coach Dave Bliss. It's Bliss that will likely draw the most interest during and after the documentary, because of the actions he took following the murder. Here's what Dave Bliss did wrong, in chronological order, and where he is now.

Pre-Baylor Life
Bliss was born and raised in New York and was a talented enough player that he played college basketball at Cornell. Then, starting in 1966, he began coaching college basketball. He started as an assistant at Cornell, before getting the head coaching job at Oklahoma in 1975. He went to SMU in 1980, but left in 1988 after the NCAA uncovered evidence that Bliss was paying players. So Bliss went to New Mexico, where he would remain until Baylor offered him their head coaching job in 1999.

Patrick Dennehy's Murder
Dennehy was actually at New Mexico, but transferred to Baylor after the 2001-03 season. In the summer of 2003, Dennehy went missing. In the coming months, it was discovered that fellow Baylor basketball player Carlton Dotson was the one who shot and killed Dennehy following an argument. Dotson was convicted and sentenced to 35 years in jail in 2005.

RELATED: Everything You Need To Know About Denney's Murder And The Baylor Scandal

Bliss Paying Dennehy
Although Dennehy transferred to Baylor, the team didn't have enough scholarships. That meant Dennehy would have to pay his own way until one opened up. Instead, Bliss paid the tuition of Dennehy (and teammate Corey Herring), a clear violation of team rules. When Dennehy was killed, Bliss feared that his rule breaking would be exposed.

The Cover-Up
Remember the old saying, the cover-up is worse than the crime? That fits perfectly for Bliss, who crossed that line multiple times. Bliss' first plan to explain the money going to Dennehy was to paint him as a drug dealer. He's the partial audio of what Bliss said, plus a transcription.

"There’s nobody right now that can say that we paid Pat Dennehy because he’s dead. OK?" Bliss said. "So what we have to do is create the reasonable doubt. I got like 30 years, I’ve never talked to an NCAA investigator. OK? So, I mean, that stands for something. And the thing about it is, what the lawyers want to do is all they got to handle is $2,000 for the down payment, and then $7,000 on his tuition. And what we’ve got to create here is drugs."

Bliss even wanted his players to go along with the lie of Dennehy being a drug dealer. There has never been any evidence that Dennehy was dealing drugs and everything points to Bliss trying to destroy the reputation of a murdered college student to save his own. Bliss would later resign from Baylor amid an NCAA investigation into violations.

Where Is Bliss Now?
Bliss was hit with a 10-year show cause penalty that essentially made him untouchable for any NCAA program. He worked as a volunteer assistant coach at a Denver high school for two years, before being hired by the Dakota Wizards of Continental Basketball Association. He resigned after a year, and took a job as basketball coach and dean of students at Allen Academy in Texas. He quickly found himself in hot water, as he was accused of "improper inducements." Essentially, two players Bliss recruited weren't required to pay the same tuition everyone else was. For the third time, Bliss was busted for paying players.

Then, in 2015, Southwestern Christian hired Bliss. He remains the head coach of the tiny Oklahoma school.

Doubling-Down On The Drug Dealer Comments
Bliss was interviewed for the Showtime documentary. He also doubled down on his unproven claims that Dennehy was a drug dealer.

"They thought [Dennehy] paid for his scholarship because he was selling drugs because you know – this is off camera – he was selling drugs," Bliss tells Kondelis during a sit-down interview in the film.
Kondelis then says: "Patrick Dennehy was selling drugs?"
Bliss: "Oh yeah, he was the worst."
Kondelis: "No I never found that out at all."
Bliss: "I know but I’m telling you. But that’s why but you’ll never be able to use it."

There remains zero evidence that Dennehy was dealing drugs, while Bliss remains the head coach at Southwestern Christian. There is speculation Bliss agreed to do the interview (unlike anyone currently at Baylor), in order to help his the book he wrote.

Follow our Baylor Bears news page for all the latest Baylor basketball news.