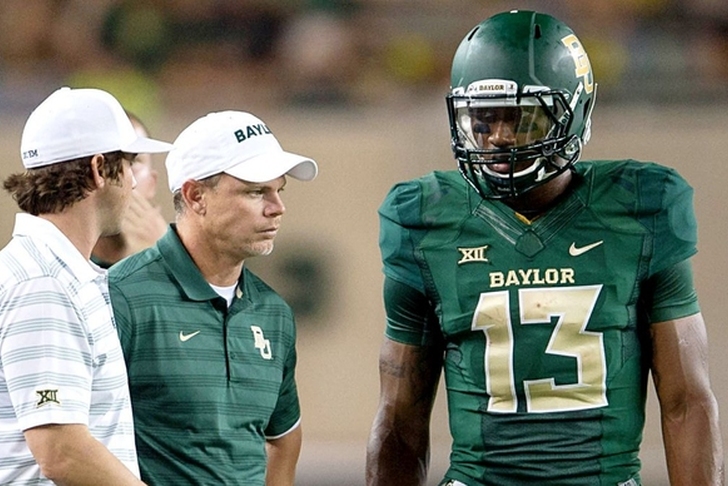 Good luck figuring out the Big 12 if you're a member of the 13-person College Football Playoff committee. You're going to need it.

One week after getting run out of Waco in a 44-34 loss to the #7 Oklahoma Sooners in prime time, the #10 Baylor Bears pulled off a similar feat on the road, beating the formerly-undefeated #6 Oklahoma State Cowboys 45-35 in Stillwater on Saturday night.

The win snaps an 11-game losing streak for the Bears at Oklahoma State. Baylor hadn't beaten the Cowboys in Stillwater since the 1930s.

It was an even more impressive win considering the fact that Baylor had to turn to former third-string QB Chris Johnson in the second half after starter Jarrett Stidham suffered an ankle injury in the first half. Stidham took over for original starting QB Seth Russell a few weeks back after Russell suffered a broken bone in his neck.

The Bears' offense slowed a little with Johnson under center, but not enough to let the Cowboys back in it. Stidham and Johnson combined for 396 passing yards and four touchdowns -- three of those touchdowns credited to Johnson (two passing, one rushing). All together, the Bears almost doubled Oklahoma State's total offense output in a performance that'll thrust Baylor back into consideration for a College Football Playoff spot.

On the other side of the ball, Oklahoma State's running game was nonexistent. The Cowboys gained a net total of 8 rushing yards on 23 carries. Chris Carson led the team with 20 yards on the ground. QB Mason Rudolph did his best to make up for that, going 27 of 50 for 430 yards and three touchdowns in the loss.

Now 9-1 (6-1 conference), Baylor needs wins over #18 TCU and Texas and an Oklahoma loss against Oklahoma State next week to add a Big 12 title to their resume. Oklahoma State (10-1, 7-1) heads into Bedlam in need of a convincing win over the Sooners to rekindle their College Football Playoff hopes.