Victory on the Beach: No. 24 MBB upsets No. 17 Villanova in Myrtle Beach title game 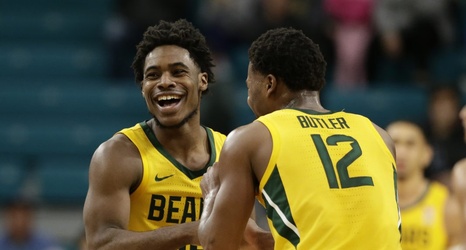 No. 24 Baylor men’s basketball ended its Myrtle Beach Invitational tournament run with an 87-78 win over No. 17 Villanova Sunday. The victory is their first since a 2016 Battle 4 Atlantis trophy.

The Bears got off to an early start for the first time during the Myrtle Beach Invitational, running up a 12-4 lead in the first four minutes of the matchup. Villanova then notched three straight three-point buckets, and the two teams fought close through the end of the first half, heading into intermission with the Wildcats leading 41-38.