No. 1 Baylor volleyball earns its way to Pittsburgh and the national semis 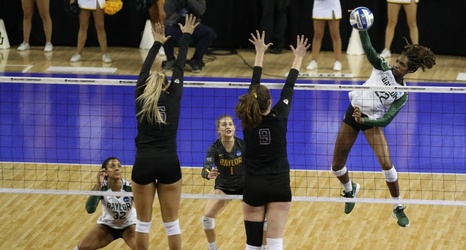 The Bears victory over the Huskies at the Ferrell Center earned them a berth in the team’s first national semifinal in program history.

Junior outside hitter Yossiana Pressley owned the spotlight in the win, posting 24 kills with just three errors for a .512 clip. Pressley’s effort earned her the Most Outstanding Player Award for the regional. Head coach Ryan McGuyre said after the game that his “Player of the Year” showed up when they needed her most.